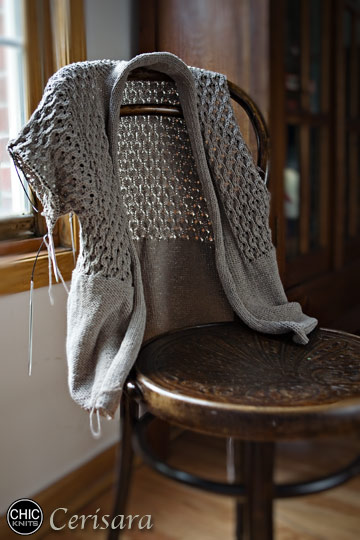 You know what’s really funny? Everytime I type “2010” I get a little keyboard giggle going. It’s a little like typing hahahahahahahaha – try it – that one key repetition just tickles me. This is probably the first time in my life I haven’t been using the previous year’s name over and over again by mistake in the new year because the new name is just too much fun!

Also big on the Tickle Front here at Chez Chic?

Learning a new cast on.

Diana Says:
January 19th, 2010
“I make the crochet stitch OVER the knitting needle for the provisional cast on. No need to pick up stitches; I just knit that back loop for the first row. Still unzips just as easily, but you save a step.”

I’d been crocheting a chain and knitting into the back loop of the chains to pick up sts, but it was slow and tedious. Time for something new! So, having a new project with a looming d.e.a.d.l.i.n.e. I decided to see if I could just do it. I remember trying this technique a loooong time ago but ended up being all thumbs and getting frustrated. (Here’s where you insert what you hear lots of people saying about knitting: “I really love knitting but I just don’t have the patience for it…”)

But in every cliche there shines a kernel of truth, and I met mine that day when I most likely threw the needles under the couch and went back to a method I’d used for a long time: merely casting on with a simple loop cast on using scrap yarn, then starting the piece by knitting a row and purling a row with the garment yarn. Then, when you want to use the reserved stitches, you just clip-n-pick out the scrap yarn.

But that idea of just zipping off the scrap yarn and revealing the new stitches just became a real dare! I could do this.

I went and read Jennifer Hansen’s tutorial (again): you can find it here on the Stitch Diva website. Thanks!

Then I went looking for videos. But I always stumble with this medium, probably because that’s my day job, and I can’t help but find lots of glitches and flaws and audio & lighting issues that take away from my learning experience. I confess; I just see the seams. You might notice that my one and only video is a testament to all of these problems!(Pot-Kettle-Black!)

But cameras keep getting better and better in low light and teachers keep practicing their deliveries and focus and there are more quality tutorials out there than ever before. So I went looking.

Here you have what some people considered one of the Top Ten Defining Moments of the first decade of the 21st. And I have to agree! People were downright GIDDY when they figured out they could post their personal movies and cell-phone flicks and others would watch and comment and even LOVE ’em. Just mesmerizing — as someone who actually enjoys other people’s vacation pictures, I had to jump right in.

First search:
Using the phrase “Provisional Cast On” returned 84 results. You can see in the picture, I was offered more as soon as I started typing. But I just wanted what I typed! In the returned results, for some silly reason, when you re-sort them by “View Count” you get 91. At any rate, too many for me to sort through (waawaawaawaaa…)

Much better! Narrowed down to 18 videos!

I immediately looked at the View Counts, then

Most viewed: Lucy Neatby’s lovely demonstration with over 54,000 views. You can see it here. Very nice.

Second, was Knitting Daily’s demo — but it had three types of cast ons and I didn’t want to swim through the whole thing to get to the goods!

I like — thanks so much! Although this video has no sound, by 26 seconds in, I’ve gotten all the info I need and am on my way to make my very first attempt at this cast on. Big points given for focus, clear lighting and large visible tools. Maybe becasue I’d “primed the pump” with my back-end researching, I was ready to rock and didn’t need the play-by-play as much at this point.

And about my work? Again, I seemed to be all thumbs during the first 5 or 6 sts cast on, but after about an inch of work was on the needle, I was off!

Here’s attempt #2 — the stitches are evenly spaced and ready to launch!