This being the most busy time of the year at Chez Chic would make it seem like there just isn’t any time to fool around.

But, as they say, all work and no play, etc. etc. etc. especially when you can sort of pretend it IS work.

Even in the middle of organizing, packaging, mailing and lots of paperwork, a girl’s gotta have a little fun!

So, I’ve been amusing myself by stitching on a cardigan that’s a little different from what has come before, but building on it all the same.

One of the ongoing trends that continutes to capture public attention is the love for the seamless. Although I thought this global crush was just about a lack of interest (né loathing) for finishing, I’ve realized that maybe it goes deeper, maybe it goes farther back, way way back.

And you don’t have to go very far into knitting’s history to see that people originally knit tubes on pins, long pins, connecting them all together by picking up stitches. Dissecting them into cardigans by steeking (and picking up more stitches).

Anywhere there was a connection, a “seam”, it probably was an area of the construction that was merely, casually picked up. It is just the most natural thing in handknitting; feels right and looks good.

I’ve been know to preach to the choir (?) about this endlessly: there is nothing like having a real grounding with it, a comfortable ease. I can’t think of anything else that just seems so organic. Picking up the stitches.

So this little number I’ve been working on does all this and more.

It is a non-raglan, traditionally shaped cardigan that looks like something off-the-rack, with set-in sleeves, banding and ribbing. But it starts from the top down, has short-rowed shoulders, then body-first (ie. Barbara Walker technique) set-in sleeves.

But because this is the bauble I’m dangling to keep me on track with all of my inevitable busy-work, I just had to mix it up even more!

The yarn I’m using for my little cardi is cotton, nylon & acrylic, deep-stash 9 type yarn, that is discontinued. I bought a bunch of who knows how long ago – a couple of bags of a droll beige – a color that actually looks pretty sweet on its own.

But I’m in need of color! And I have soda ash! And Procion dye!

So I decided to see if I could turn this into a color win, in a way so unscientific it was going to be a crapshoot. ;p

With only a little time, it was curious versus meticulous with curious for the win! I wound a mini-skein from some section leftovers and got to it with a little stainless bowl, water, salt and some Procion MX dye. These are all the things that would be used in a regular Chez Chic OverDye Fest, but tuned way down to the lab rat scale, the junior-high school science fair project! Not having enough time (because but of course, multi-tasking was exploding everywhere), it was mixed and dunked and mixed and tested. Placing it near the coffee pot ensured that it would get at least a little love on the cuppa refills.

By the time I was ready to blow-dry my hair, it was dunked into a tiny bath and rinsed.

Here’s what came out of the mini-pot: 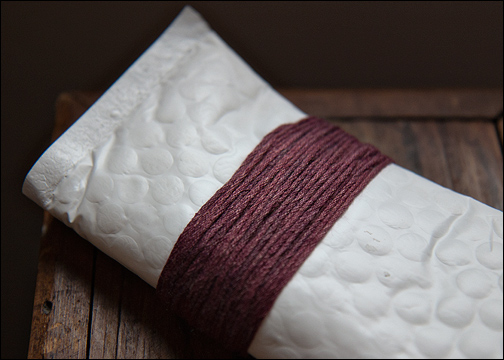 Not really bad! A little striation, like kettle-dyeing, from the fiber mix in the strand, a little lack of soda ash in the fixing.

Now all I have to do is pick a color and go to my favorite downtown art store, Dick Blick, and get some dye for real!