I’ve always been drawn to those knitting techniques that are dangerous.

You know the ones – the ones where you cut the fabric to divide it (Steeking) or treat wool in the way opposite of normal to get a thicker, firmer fabric (like Felting).

Working with this denim yarn was right down that dangerous alley and I am game!

To achieve its optimum characteristic, towards the end of the project, the maker has to just jump off the cliff, jettison all common sense and deliberately torture the work. (All with no guarantees…)

At this point, I’m 1/3 done with the second sleeve of my indigo Cerisara Den-M-Nit cardi. It is looking long and lanky and a little flopsie and untidy. Even though I switched to bamboo needles early on, its fabric just doesn’t have the integrity and cohesive feel you normally would find on something you’re working the correct gauge on.

But just as I was starting to lose faith (which at this point in the project is rather ridiculous because I know I just won’t walk away), I remembered something. 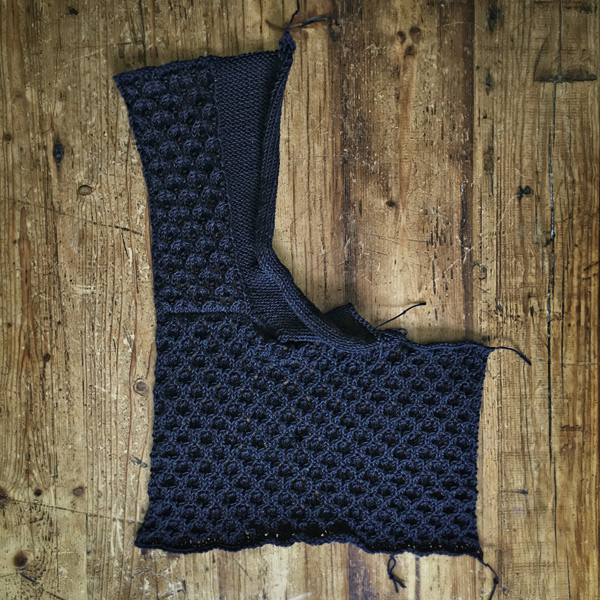 I had a big swatch I could torture and if successful, go forth to the finish line and “knit on, with confidence and hope, etc…” YAY!

When I switched to bamboo needles and yes, started over from the beginning, the garment was well on its way: the upper Back and Left Front and its Neckband were done. On its longest edges, it was a whooping 18×13 inches of idle loveliness. (For some reason, I could not bear to frog it!)

Now it was just begging for those final denim yarn game steps to prove to myself I could do it, I could master this Indigo Challenge!

So I processed it just like I planned on shrinking the cardi itself. I washed it in my top-loading machine with some old towels and dried it in the dryer.

And what to my wondrous eyes should appear? 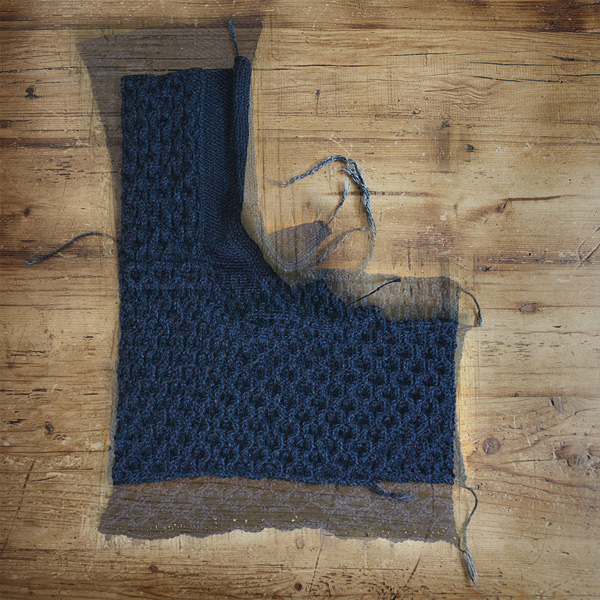 Now, instead of a wiggly, slightly sloppy feeling piece, it had morphed into a firm and symmetric and LOVELY testament that the someone who invented this wonderful stuff Indeed Knew What They were Talking About!

Most fascintating and joyful of all? This was the thing I was most skeptical about – I just didn’t believe it was going to look like the promotional shots in all the marketing.

But indeed – it is softer (still dark) and variegated and full of beautiful depth.

Now I’m ready to finish that Last Sleeve with a bang!