Lots of progress being made here on the Den-M-Nit front! It’s been spring showering and I’ve been happily knitting away on my Cerisara indigo cardi. It was time for another flower portrait – this time in the back yard by the Clematis montana ‘Fragrant Spring’ which is actually done flowering so I added in a few Senetti bi-color blooms to spice it up… 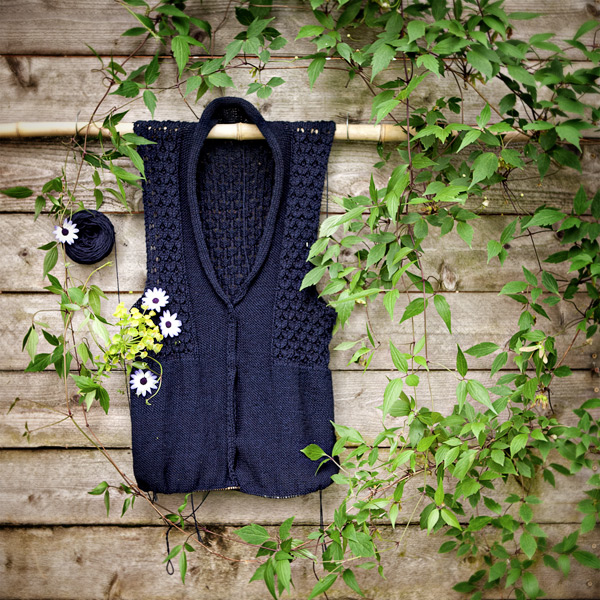 Notice the sweater is looking rather long and lanky here – especially the armholes. Am I panicking? Well, I have to admit, now that there’s some serious fabric at play, I’m a little more anxious than when it was just the back section.

This is one of those love/hate times in knitting: it’s something you might not have tried before and even though you’re following directions and have seen with Your Own Eyes other folks’ successes, it just looks Weird.

But somehow, it just Feels Right!

I’m a deep veteran of felting and this has most of the hallmarks of that type of technique. Just like this one, you have to Boldly Go and just trust that the end of the road IS your destination.

Exciting! (But still a little scary).

What’s surprisingly not as scary as I thought it would be?

The Effect of Knitting with Indigo Yarn
When I started this project, I went out and bought an apron. I was convinced I would be covered in saturated blue every time I picked up the needles. The only one the store had was black so I got it – even though I wanted a white one because I wanted to see, from the beginning to end, just how much of a mess using this type of surface-dyed yarn is.

Well, it’s not showing up on that dark apron but check this out. This is taken after an hour or so of knitting at my knit group – it sort of looks like I’ve dipped my digits in an olde ink pot! :)

But just a little soap and warm water and everything comes off nicely.

There IS a permanent situation, though. 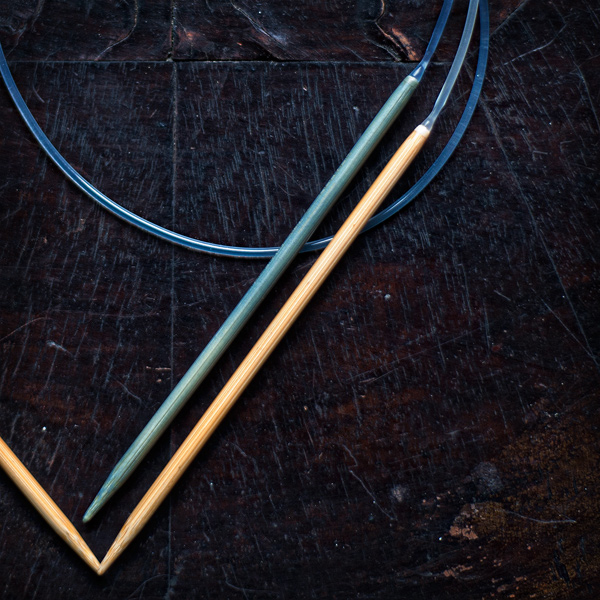 If you recall from [part 2], I switched from working with nickel needles to bamboo and they have become quite colorful!

The needle you see in the middle is permanently colored now – but it’s rather beautiful don’t you think?! Not sure I’d use it on a light colored yarn – but maybe there’s some more indigo yarn knitting in my future. I still have two cones left! :)

Coming Up in part 4: Picking up stitches using Denim Yarn