is it Wrong to love Finishing?

To say I was pleased by the difference in the look of my cardi once I finished the first buttonband is, well, quite right , quite astounding…

Gone was the ripply, stiff tape, and on was the nice flat band.

After I picked up the stitches for the band (5/6 ratio on my DK weight yarn), I casually knit the thing while watching Harry Potter & the Goblet of Fire on television. Seeing the adventures of the Boy Wizard on the small screen was quite entertaining (except for all the commercials) and before I knew it, voila!

There was a buttonband!

No Pain, except for the little bit up by the collar where I savaged the original stitches when I ripped out the zipper tape.

If this had been a slightly fuller, *hairier* yarn, nothing further would’ve needed to be done.

Filatura di Crosa 401 is a very processed matte-type yarn so there were tiny gaps between my K2TOGs. I always leave a healthy tail of yarn when I attach it for the initial pick-up, so I used that to weave around the gaps. 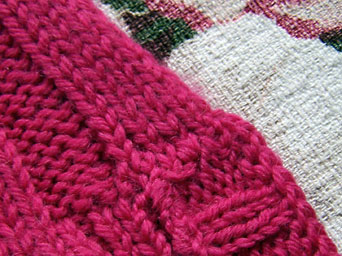 Now that I have a super-close-up in the light of day, I see a little hiccup towards the center of the picture. But that’s the beauty of the Human Eye vs the Camera. The Machine picks up every discrepancy; the Eye is more forgiving.

For Instance: My photog co-workers and I are endlessly discussing High-definition Television (HDTV). The recent surge in big-screen sets around the country’s living rooms has made for some interesting discoveries. Where once all the foibles and bumps and glitches of the human face were smoothed out by the Lo-Def sets, now they are in our face in the very sharpest relief. Add a huge screen to the mix and you are paddling up a visual landscape that might make you duck under the sofa! (Watch Ghost Whisperer or any CSI episode and get back to me.)

What is maybe tolerable on the big screen in a movie theatre is really scary in your living room; scary in a run-for-cover HARSH way.

Even the *regular* Talking Heads in news shows, talk shows (TYRA!) and reality-bites type shows, LOOM and pontificate like the Great Wizard of Oz and I, for one might have to go hide from my TV, until the people making it learn to think of us little guys watching those Giant Heads at home.

oops. Knitting as a Shield!