Even though Chicago has a history of demonstrations and rallies spanning two centuries, I’m more familiar with “the whole world’s watching” than the incredible social protests that have taken place here…

Even more obscure in my history education? La Suffragettes!

A little digging around unearthed some local facts: “Jane Addams, Chicago’s premier reformer, was also a prominent figure in the women’s suffrage movement. Addams and Elizabeth Burke of the University of Chicago served as delegates to the Women’s Suffrage Legislature in 1911. British suffragette, Emmeline Pankhurst, offered support to the women of Illinois during a visit to Chicago in 1913.”

Hmm. Emmeline Pankhurst?! Ah, “…a British political activist and leader of the British suffragette movement which helped women win the right to vote. In 1999 Time named Pankhurst as one of the 100 Most Important People of the 20th Century, stating: “she shaped an idea of women for our time; she shook society into a new pattern from which there could be no going back.” She was widely criticized for her militant tactics, and historians disagree about their effectiveness, but her work is recognized as a crucial element in achieving women’s suffrage in Britain.”

(But, interestingly enough, when she was in prison, she still was busy…) Emmeline and her daughters Sylvia and Christabel were front-liners in the many public demonstrations that took place in Britain during the early 20th, routinely arrested and participating in behaviors most regular, proper women were not… 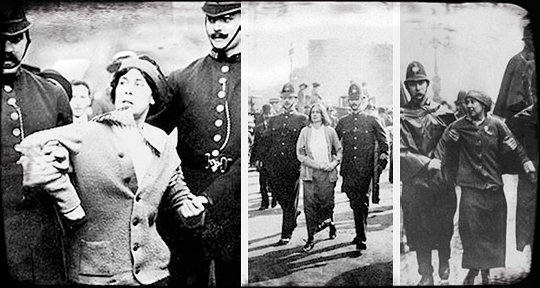 And here, in the revolution, we see the evolution.

This was a time when impoverished women flocked to the Big City to seek work in the bustling downtown business centers, where something like a bustle would have just been extra junk in trunk. Can’t sit, can’t move, gone.

In Chicago, all of the women working downtown were a stone’s throw away from Marshall Fields, one of the newer centers of targeted commerce whose motto: “Give the Lady What She Wants” seemed to embrace the other ideals that were percolating around, that weren’t getting met!

In London, Selfridge’s (opened by Marshall Fields’ ex-manager) catered to the Ladies of the Revolution:

From The New Humanist: “For the Suffragettes, the department stores represented both opportunity and limitation. While some more radical women disapproved of the trivial distractions they offered, they also held meetings in the stores and even used them to distribute their own propaganda.”

“Well aware that the Suffragettes represented their most important constituency of customers, the stores supported them by displaying merchandise in the famous violet, white and green colours. Selfridges even flew the Suffragette flag on its roof. There could not have been a more brazen signifier of the confidence of the department stores and their massive public influence.”

Even while others were mocking and belittling the effort (see at left: “Popular anti-suffrage postcard, depicting a wailing kitten intended to belittle women fighting for the vote.” many were seeing the continuing economic opportunity that was exploding everytime a women dressed, ate, traveled, and demonstrated. Rrrrwwwrrr!

The mainstream Lady was a stay-at-home adjunct to her parents or husband; not many went a-galavanting around anywhere – either in town or out. It was those who left home and had to work who pushed the evelope further everywhere through the social fabric.

And so, in the street and in the stores, the working class merged and crossed paths with the upper class, in ways no one had imagined before, with amazing results…