Like millions of viewers around the globe, I seem to be in thrall to something kind of unexpected. Even though I consider myself to be a stone cold Citizen of the 21st, I am mesmerized by the tale of an upper-crust family, their army of servants, but most of all their Lifestyle.

And, it didn’t occur to me, until I was watching the premiere episode of Downton Abbey Season 2 this last Sunday, that all of this mighty foo fa rah actually takes place almost One Hundred years ago.

The Crawleys, et all, are languishing in the complications of high and low culture in 1916.

Into the mix comes the Modern.

For me, that’s the ultimate fascination.

Along with the estate (overwhelmingly HUGE), the sets (impeccably drawn), and all the details of life above and below stairs, something interesting bubbles right below the surface of it all.

And here, in an intriguing and subtle way, we see the most important sub-plot of all: that while women were claiming their right to vote, the female wardrobe finally evolved into something mobile and wearable and yes, arrestable.

Even though it’s a slow trickle down into the older generations, the Crawley Sisters go dashing onto the Runway! From shorter, simpler dresses (at least in the daytime!) to pantaloons, it’s full-speed ahead.

And what to my wondering eyes should appear: Seeing this made me remember something and I went running – I possessed (from my wild and crazy flea-marketing days) some very, very old craft magazines, from right around this time. 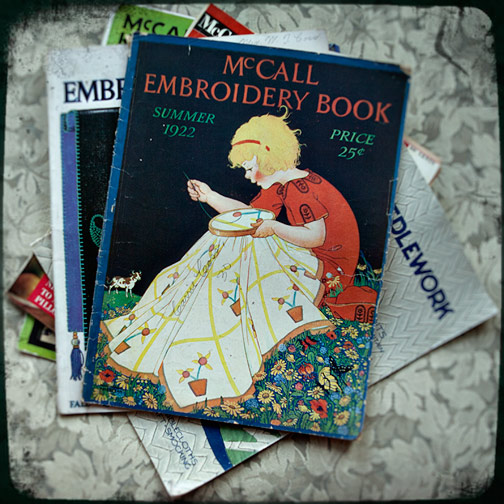 Now this, although it’s titled an “Embroidery Book” is really much much more.

Just like Ethel Parks, Housemaid, who often enjoys a magazine or two in her free time, this is a multi-function tome for the masses. 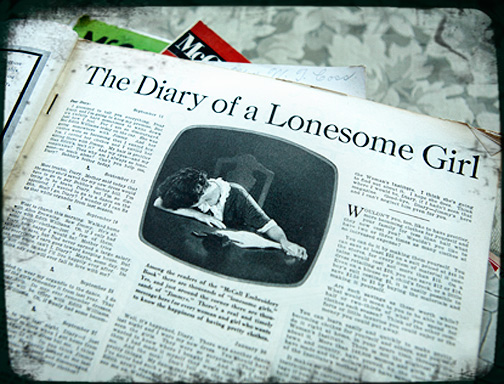 which could be one of the 1st mass-distributed reality-shows-as pitch platform, where everything from wardrobe to relationships is dished with the product solving Everything!

Dear Diary:
I decided to wear my organdie to the dance. I do hope that none of the girls remember it from last year. That new sash may help. Do men ever remember dresses, Diary? Jimmy will be there with Edith Williams. Always Edith Williams. Oh, if I only had some becoming clothes!

And maybe, Ethel daydreamed a little while she was making the Mistresses’ bed: 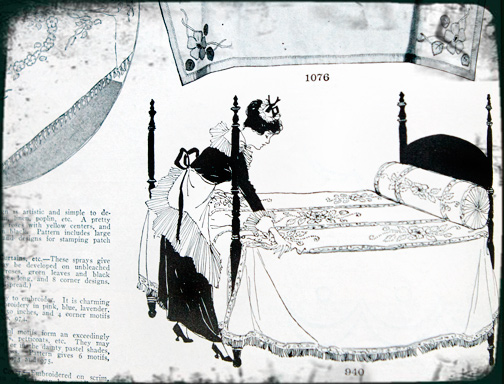 Of course, the Mistress embroidered all the “Lovelies” and Ethel just put them in their place, but one can’t help wondering if maybe Ethel and maybe her friends, styled themselves as well: 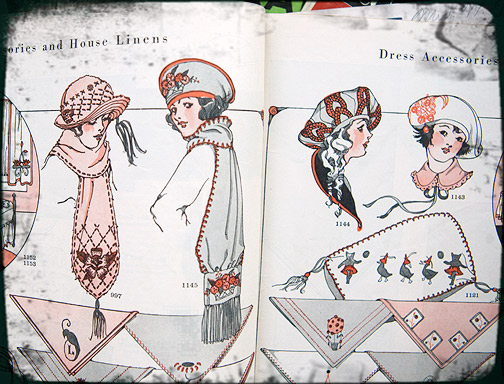 But what about that sweater? Looks almost like it could be from Top Shop, no?! 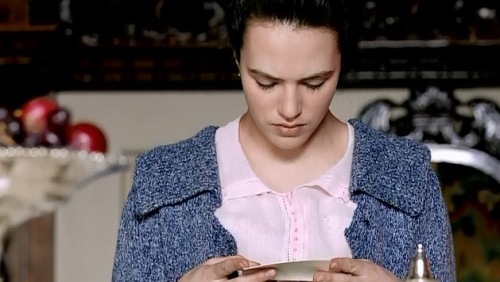 Stay tuned for more masterpiece ahead…