I’ve been having a great time lately de-stashing and organizing Studio Chic this week.

Re-discovering stuff that was hidden or out-of-sight has been great fun! I found lots of skeins from festivals and friends and hand spinners that have landed here over the last couple of years so I’ve put them all together in their very own area. 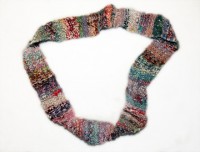 But what to do with all these single skeins?

I love what I call a Skinny Cowl.

Although making a regular-sized tubular pipe-type cowl is pretty darn easy, they are really thick and need some really frosty-type of air for me to want to grab-it-and-go.

A Skinny Cowl, on the other hand, is worn by wrapping a long donut-shaped piece around one’s neck. It isn’t as thick or stiff because it layers up on itself when it wraps. You can adjust how tightly you wrap it to control the look (looser like a necklace) and the warmth factor (tighter).

And, it also works a lot better, IMHO, as just an indoor neck-piece accessory.

This is the perfect chill-chaser to wear around a drafty house — just the thing to make a difference between a cold tickle or the warm-comfort of home.

Using just a few yards of yarn and not much time, you can crank these out for great gifts as well!

An orphaned skein of Colinette Point 5 yarn (55yds) was the original Super Bulky yarn I used, and it will knit up to about a 4-foot around cowl.

Twinkle SOFT CHUNKY is also great for this and comes in such gorgeous colors!

But most of the other skeins that came from festivals, etc. had more yardage, but were a little thinner – Bulky weight – so I made a longer version from some handspun (using about 85yds) that turned out to measure 70″.

And last, but not least, you can combine yarns from your stash to make a great Super Chunky yarn. Just use three strands of anything that knits 5.5-5 sts to an inch. I like to make a big ball with the combined yarns before I start knitting, instead of using separate balls…

I like the longer Skinny Cowl the best for outdoors and the shorter version as an accessory.

It’s just an ultra-simple garter-stitch donut but we’ve taken the guesswork out of the dimensions for you! :) Knit every row until you have about 2 feet of yarn left.

Bind off all stitches.

Without twisting the piece, put the cast-on edge flush to the bind-off edge and slip stitch together. Weave in all ends.