WIP #1: chunky cardi in Eco +
WIP #2: beanie in lovely yarn from local dyer Alexandra’s Crafts in Silverton OR (LaGrande in the color INDIGO)

..really in love with this simple navy ombre tonal poem… 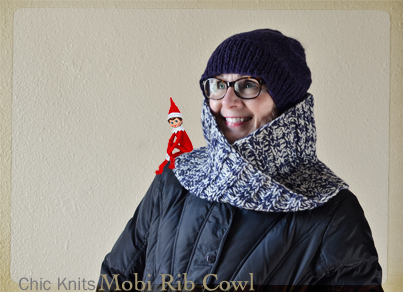 uCan make one too!

sometimes it just isn’t over until it’s over…

Moving cross-country last year winnowed out grand portions of my household back East.

Not spared: my collection of sweaters.

Gone to good homes & beyond, anything that would not fit into the three remaining packing boxes on moving day. (You see, I’d saved the most valuable belongings to be packed until last.)

It was ruthless. And Reckless.

Funny thing is, now that I’ve put some new roots down, and it’s gotten very chilly, I’ve been reaching for some phantoms. These were the items I thought I’d brought, rescued or put away for a particularly c.o.l.d. day. But they are no longer in the wardrobe, oops! but gone on to a, hopefully, better place, c’est la vie.

Now, what remains has to really earn its keep. Once you’ve been recklessly ruthless, it’s much easier to keep downsizing and exiting those styles that are not being worn.

Long ago, in 2004, I knit a wonderful cardigan, one of the most ambitious projects I’ve ever attempted, a design from the Vknitting Fall 2002 magazine.

In my newbie-ish, mad-knitting-scientist way, I tinkered it right from the beginning, imposing a scoop-necked huge collared zippered cardigan mod on a pullover pattern.

But. I never wore it!

Thinking it was the zipper I really loathed, that became a buttonband (in 2008).

And. I still. Never wore it!

How it became one of the sweaters that survived the moving rough cut is a mystery but survive it did and the other day, I decided it was finally now or never.

Even though I really love the color, it was time for a change!

So off came the collar, on went a neckband and into the bubbly. I used something I’d acquired at a fiber fest long ago – some Gaywool Dye in the color LONGWOOD, a rich deep brown.

This product mix is really appealing – no additional stuff has to be added during the process (salt, sodium acetate, etc) so it was almost a set-it-and-forget it kind of hour or so in the simmer.

Rinsed thoroughly and given a final vinegar-laced pass and VOILA: 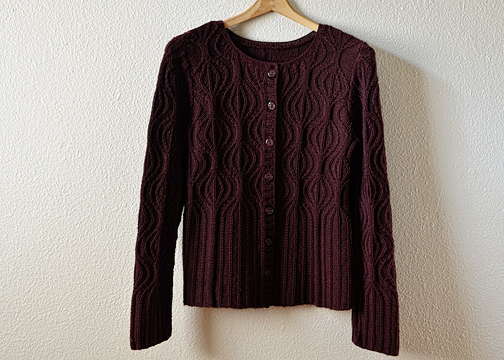 Even the buttons match now! 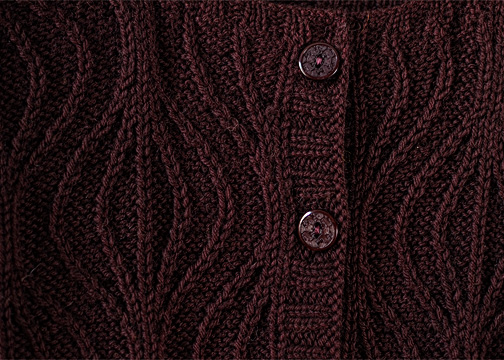