the Homely Home Part 5: Holiday without the Crazy December 29, 2012

All of a sudden, now that the excitement of the Mayan apocalypse is over, it’s hit me that, indeed it’s 2012 that is running out…

I hate to admit it, but there was something a little unsettling about living through December 21st this year and although it didn’t slow me down on the holiday food/festivity front (super nom this year), it made me ignore the fact that some other important details were getting lost in the (supposed) mayhem.

En point: my UMA sweater has been lanquishing with one sleeve and two sleeve caps for a few weeks. Heh. Now, it’s fair to say that I’ve been working on some flash new designs for the Long Beach TNNA show in February (iiiEEeeeeee – hope I get done!) and have been baking up a storm and THAT’s what’s derailed my personal knitting.

But that wouldn’t quite be quite honest of me.

I stalled because I had to wind a skein of yarn.

Lame, I know, but sometimes having a fresh little stash of yarn that’s commercially wound is just brilliant (as opposed to having to take to time to finagle a hank).

I also was having an especially speedy knit going on with one of my samples and didn’t want to spook the Muse.

But enough excuses: not only are both sleeves finished now, I’m 20 rows away from being done with the second pocket lining… 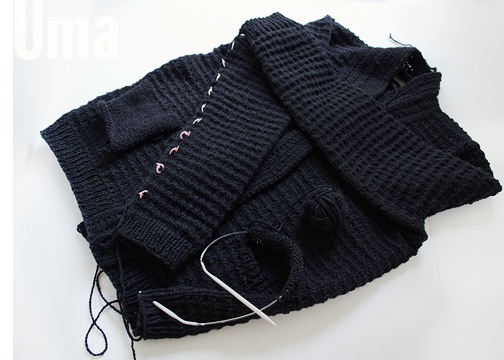 I knit on this last night until my eyelids were so heavy I just couldn’t go on without sleeping upright.

What really saved me was that I had marked every increase I’d made on my 1st sleeve and then the 2nd and could easily tell not only where I was in the pattern (counting increases) but how long I ultimately made Sleeve #1. We like the match-matchy row-wise over here any day! This made Knitting with Black Yarn so easy, I think it’s going to become a habit… 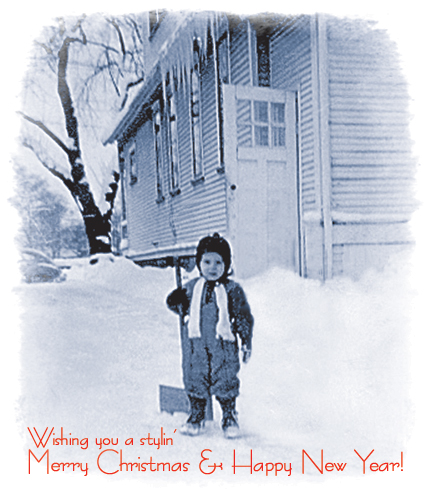