Whoa. Turn them on their ear and make them disappear and see how your little heart longs! I’ve been in Portland for almost a month now. It’s been a tiny adventure, a lot of it played out only within these 4 walls (we won’t even mention the days after the furnace died. RIP).

A longed for household reunion detoured into a slow and a little bumpy ride.

Most of Chez Chic has been in storage (while I lived in the Moonrise kingdom for a few weeks) and it was packed up by some local “talent” and podded out (love these guys!) on a truck (2,133 miles) that got here a few days after I did. In the meantime, I was still living out of a suitcase but now sleeping on the floor.

It was thrilling, in the same way things feel right after one gets that first apartment after cutting the apron strings of Maw et Paw.

But then the fun started! There was painting! Much cleaning! And finally, unpacking!

And that was rather anti-climatic OR a screaming mimi depending on how you look at it. When the storage company packed the pod, they “forgot” to use any tie downs and the stuff avalanched cross-country! And after we dug out from under all those boxes (miraculously the only thing broken was one coffee cup) and the kindly unpackers got to the end of the space something really BIG wasn’t on board: my couch! YIKES! they forgot that too. Since I got rid of all my bedroom furniture, the place was pretty darn bereft of knitting perches! Lots more homey – the couch, the knitting, the coffee and even some wee sunshine coming through the windows makes it so so welcome.

Still lots of stuff unpacked (mostly books and yarn, hee)…but now there is a nice cozy knitting corner going on. My UMA sweater is moving right along (and I’ve got a couple more upcoming designs percolating nicely). One more sleeve to go and I have a new sweater for my new city.

It’s good to be Home. 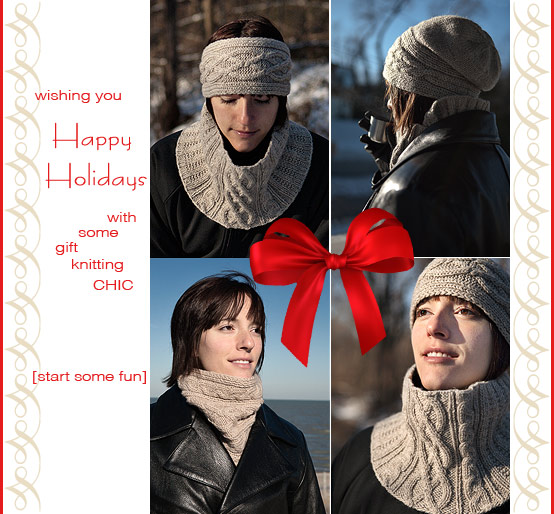 It’s the most wonderful time of the year!

And we have the perfect patterns for your Gift Giving knitting…

To celebrate the season, enjoy a dollar off some of our most popular accessory patterns!

Just enter this code: HOLIDAY in the code box after you place the first eligible item in your cart.

(Then each additional eligible item will be automatically discounted when put in the cart! :)

CHIC STYLES!
The Elisbeth Collection – 4 styles in one pattern so you can gift FAST (headband) or SASSY (shaped cowl) and THRIFTY (that’s 1.00 per with the savings…)

– He Said She Said