I can hear the leaves falling on the ground outside. A gentle wind. A rustling snap. 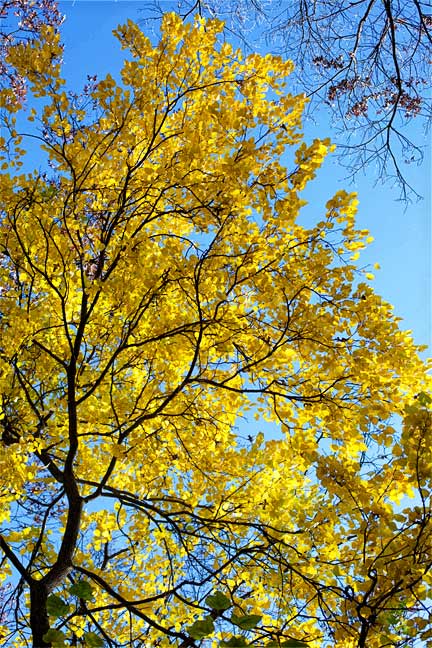 They stand against the clear blue sky torchlike and bright.

So easy to stroll under their arms, looking up, all the while walking and listening to the scrunch and pop of the fallen leaves underfoot. I twirl. 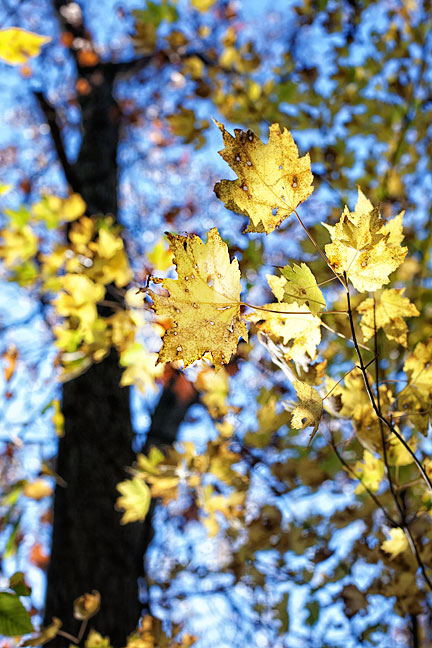 Magically inviting, the deck bekons with a task all its own: more double-point needle knitting! 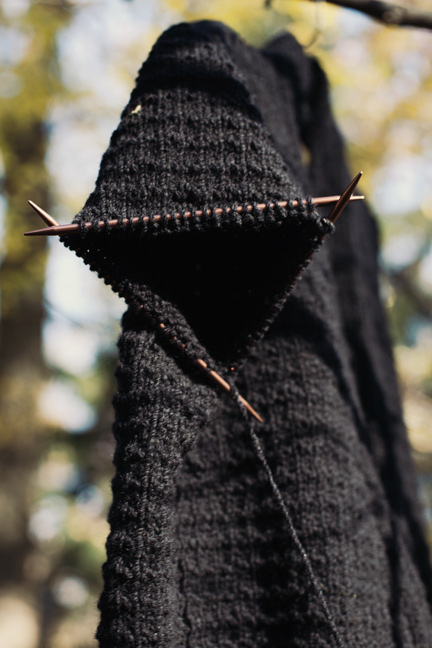 The trees are painted with color and there’s been a nip in the air (and a little rain).

My BKFF (best knitting friend forever), Eden, from Chicago, came out to the lil’ log cabin for a visit this week.

I could not resist all the farmer’s market veggies that were about and made us a pizza for lunch.

They were oven roasted (450 / drizzle with olive oil / check every 5 min) before I went to pick E up from the train.

When we got back, I rubbed a pre-made crust (Artisan, thin) with some olive oil to crisp it up a bit and turned the oven back on.

OOPS! Forgot to take the roasted veggies out but something wonderful happened during the pre-heating – they blackened around the edges and carmelized WOW – zucchini and wonderfully colored peppers – yum!

Then, the crust was baked for <10 min and treated to a few spoonfuls of regular red pasta sauce. Then on went the roasters: 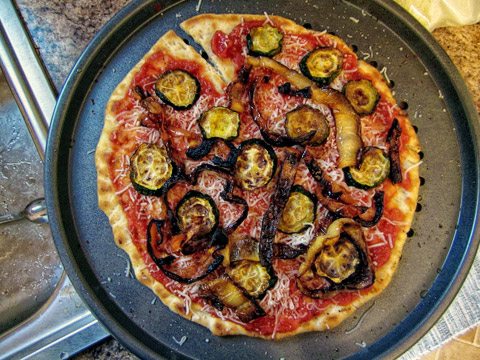 While they had been roasting, I’d sauteed a bunch of sliced mushrooms and these were along with sliced black olives and a dusting of cheese (mixed Italian?! from AL’s) joined in the mix. 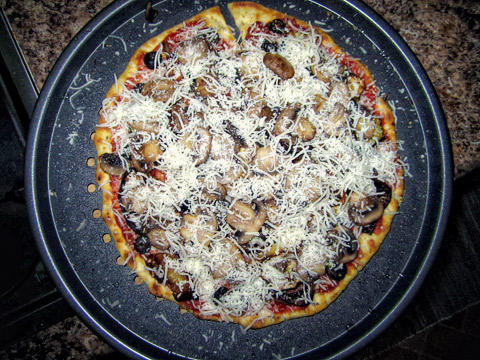 Now, another turn in the oven and VOILA (& I almost had it all eaten before I remembered to take this) 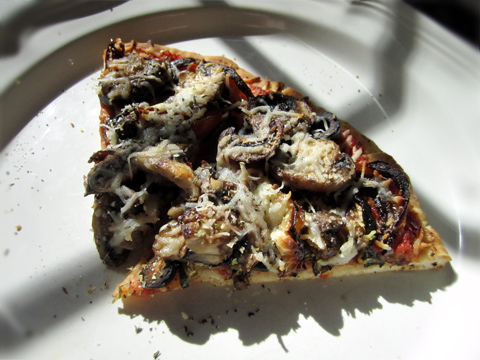 Fortified, we went out for a walk to the lake and saw these lovelies coming down the creek. 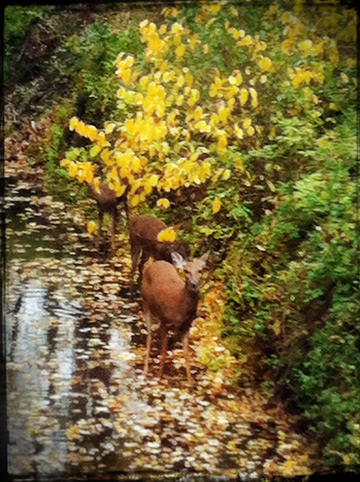 There were five altogether – including a “teen-age” male that had the start of some antlers that looked like furry pompoms on his head. 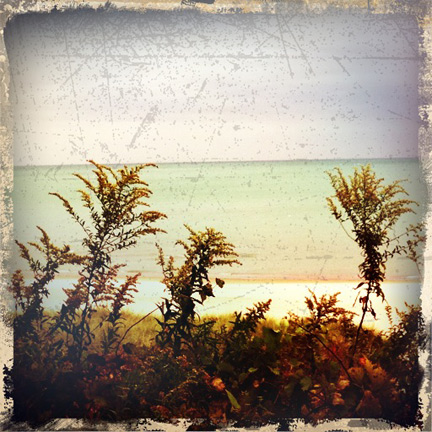 Even though this looks like it could be Florida (that’s golden rod in there!) this is actually Lake Michigan (as seen by my iphone) which is about a third of a mile from the cabin. When the wind whipped up and the sky darkened the water to navy on the horizon, we remembere: the cabin was waiting in the wood, warm…

Putting together the studio relocation has been something that is referred to in lots of professions as Hurry Up & Wait. Everything is in place, ready to launch, but there’s a little bit of a gap between now and then…

Even though I’ve had lots of experience with this from ye olde news journalism days (election night? playoffs under the net? the jury’s in!) it’s taken on a more personal twist as my Cabin Days have caught a little cabin fever. There seems to be a prevailing LIMBO effect setting in that needs a tune-up.

One of the best ways I know how to create a distraction? Start A New Project.

But here’s the rub. I’m all packed up and ready to go! (Yay!) But my stuff is in another city, (not even the final destination), waiting for its turn on a truck. (Boo!)

Here in the woods lives whatever could fit into one of those super-sized plastic tubs to go along as WIP & samples.

Of course, once the Little Bad Muse moved in a couple of weeks after moi, it turns out that I didn’t bring the stuff I actually want (or need) to use.

Case in point: I’m making some hat samples for the winter season but can’t find all the ingredients that I need to use (in storage). I actually went in and visited the pile to bring my bike out here but it was evident that the whole thing was like a game of Jinga at this point and should be revered not touched. (Truly – leave it to the professionals — but it was worth it just to see the look on the guys face when I asked!)

So, when it turned out that the 16″ circular needle I was using was so unproductive to speed knitting (tips too long to really knit curves), I dug through my box and found I had a 12″ circular needle.

THIS was even more disappointing. (Sometimes you have to wonder if manufacturers are using their own tools – or testing them with the end-user). No matter how I tried, the tips on these were even more frustrating, even though they had a built-in bend at the cable join.

Why don’t circulars have proportioned tips? Why isn’t it closer to 2″ instead of 4+ inches? The action takes place on the first inch of the needle no matter the length; the rest is just a holding mechanism.

I was so frustrated by the slooooooooow progress I was making, I did something I avoid like the plague.

I fished out the DPN.

And people, I’m in love… 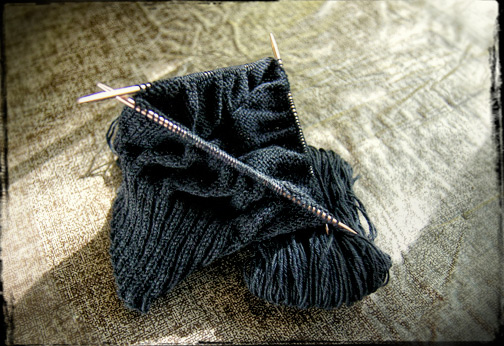 For some reason, maybe the fact that living in the woods has calmed me down many, many notches, these feel totally normal to me. In the past, there was much poking, fumbling, and mayhem, to the point the poor little WIP might just live under couch for awhile. ;p

Now it’s full speed ahead but I have a question for all you DPN-lovers: HOW do you stack your needles?

Then, when I start working the sts on B, I have Working Needle C over A.

So far, no ladders, and it’s pretty darn fast.

Am I missing something here?

I saw the fastest knitter EVER on the #66 bus one day knitting a sock at super-sonic speed and would love to go FASTER!

Wish I could see that sock one more time.