If there’s a draft in the house, there’s something you can do that others have done forever: wear your hat all the time.

It’s a 24/7 thing that I once thought a little crazy, even a little thuggy, but now that there’s no cure for the indoor wind (neighbor refinishing his floors! in January! open doors/windows everywhere!) one must do what one must do. 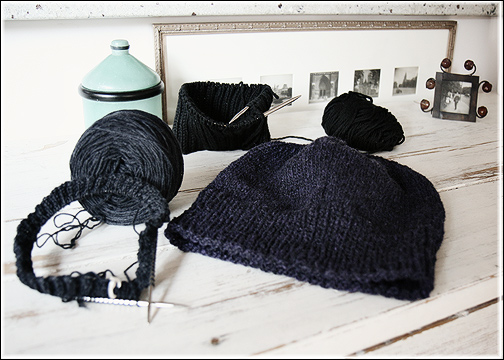 And since I seem to be on a daaark yarn bender and have plenty of left-overs from other projects, it was no time at all before a lovely, slouchy navy beanie was ready to wear (Black Water Abbey Navy Worsted)…

Très beanie-love continues in a black ribbed version (Debbie Bliss Aran Cashmerino), and a sock-weight dull-navy version (Aruacania Ranco), with some kind of nod to the gurnsey patterning looming.

While I was framing this pic on my little desk, the lens revealed something I’d not seen before.

Behind the caps is a small collection of photographs that I brought back from a trip to Paris in 1995. They are 2.5″ by 2″ contact prints of someone else’s Parisian vaction that I framed up all together. You can see Notre Dame; the Seine; and some really lovely old neighborhood buildings. They were in a pile on a table in a small pocket-sized flea market we stumbled on while wandering in the Latin Quarter before I scooped them up.

And even though the pictures aren’t in very good shape (and really small) they had something that’s been twirling my brain for the last few weeks!

They are from the early Twentieth Century!

I give you Madame #1 with her incredible wheels: Now, although she is probably wearing a felt hat, it tickled me to see that its shape was rather Beanie in nature. Love that!

Madame #2, out for a stroll with the enfants bien-aimés: 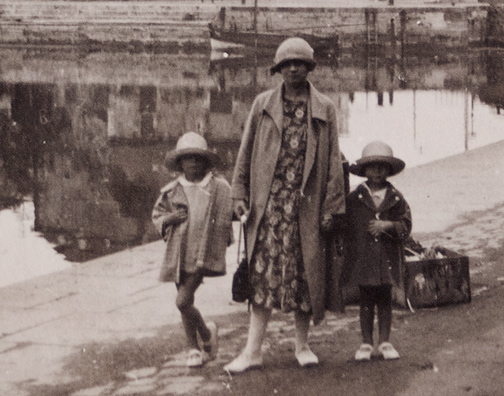 So exciting to find these incredible shots while I’ve been enjoying all of the fashion on Downton Abbey — fueled the fire!…more to come…

So I welcome the chill and celebrate with a new chapeau! 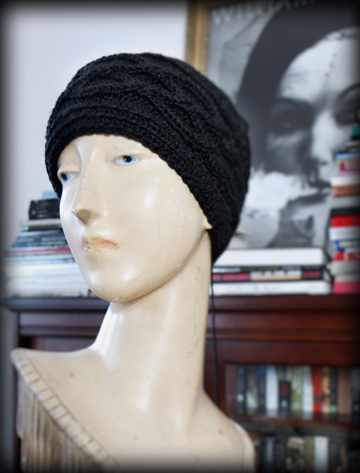 This is my personal Elisbeth Cap that I’ve been knitting in the evenings.

Am still having a love affair with black yarn, even though it’s finicky
and hard to photograph.

Pourquoi? Because, imho, it rocks a cable like almost nothing else… 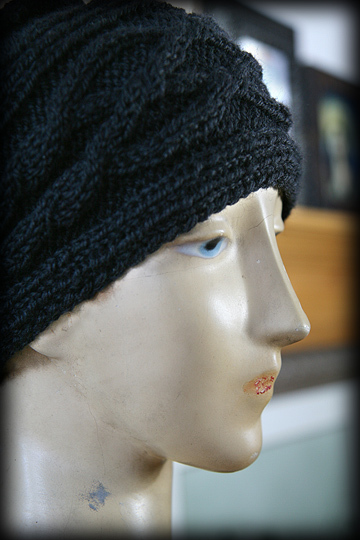 This is going very fast, although I had a panic attack last night, thinking I was going to run out of yarn before this got to its slouchy finish.

I ended up un-doing the ball of yarn, measuring it via a very loose *arm’s length to sternum* way (about 39″) and think I just might squeeze it out… 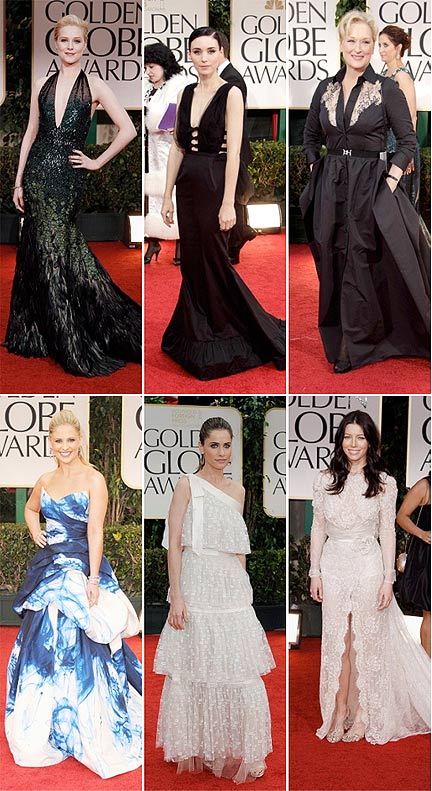