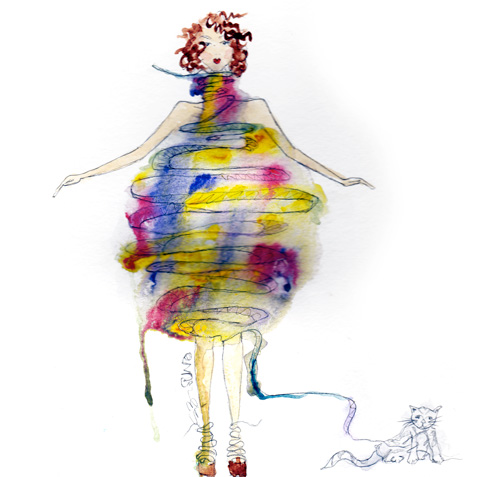 This is quite possibly the best Halloween costume I’ve seen this year!

T Magazine challenged 10 designers to turn everyday objects into killer Halloween costumes. This one is by the SUNO team of Max Osterweis and Erin Beatty and includes a lil kitty accessory…

..drumroll please…and the winner of the book drawing from last MMMirth is the lovely Genie!…

One of the greatest things about this time of year is the Change of Seasons. Why? Well, one of the reasons is that if you live in this type of climate, you have more clothes, perhaps, than let’s say, the average Southern Californian. Heh. (waves!)

Call me crazy, but who wouldn’t love that (especially a clothes hound like myself)?

I know I have more parkas! (And jackets, and coats, and comforters and on and on and…)

Right about now, everyone here goes rousting about in their closets to haul out and get the colder weather garments back in circulation.

I’ve been having a lot of fun “shopping” in mine — especially in the armoire that holds my sweaters.

All of the cotton/warm weather wear gets put up high on the top shelves and down comes the woolens. Further sorting puts things into piles: light to heavyweight; informal to formal.

But in doing this, I noticed I was burying some things that were previous favorites to wear. What did they have in common? They were mostly slightly heavier, everyday-type wool sweaters, usually worn with a down vest or as a jacket. Many had something I was entirely enamored about a few years ago.

And the light bulb went off!

Since I wasn’t loving them as jackets anymore, maybe they could just be cardigans. Maybe they’d be more comfortable as an inside sweater. And maybe, just maybe, they would be more wearable with a traditional button band and buttons.

So, a transformation began!

Here is a favorite from quite awhile back which is in great shape but was not getting a lot of runway time anymore.

It was one of my pets because it was a start-to-finish total DIY kind of thing. I kettle-dyed the yarn to a favorite color pairing and made a slick little ribbed collar, all closed with a zipper.

What is totally amazing is that this was in 2005!!

Further digging in a box that holds completed project yarn found enough original yardage to do the trick! 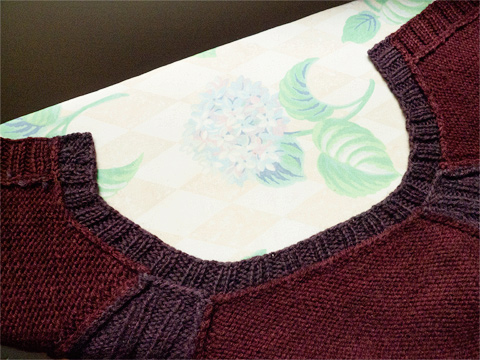 First, the zipper was carefully removed with my nice sharp seam ripper. Then the original collar and bands were removed and new bands were knit in 2×2 ribbing to match the sides of the sweater.

The bands were steamed, from the wrong side, and left to dry. 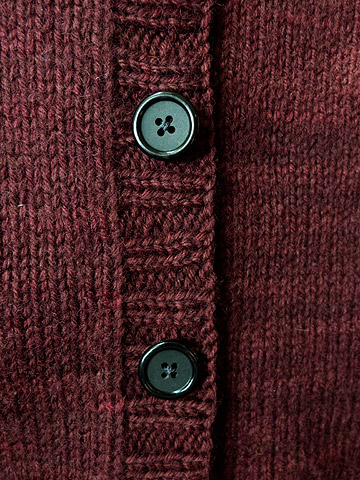 Some nice, but good quality, plain black buttons joined the mix and now 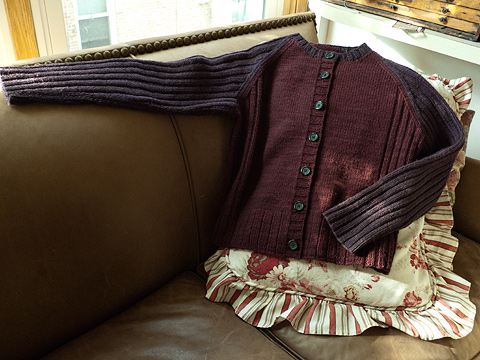 back in circulation, a whole new look!

Call me crazy, but it’s like having a whole new sweater, it looks and behaves so much differently than how it was being used before.

I have to warn you though. This is pretty addictive. Right after I finished this one, I found another fab candidate for a transformation…

One must remember:
“…a good servant retains a sense of pride and prejudice at all times!”

I’ve just returned from a couple weeks post-op withme moms and realized I’d spent a lot of time in the comforting arms of MasterpieceT and classic movies. We watched all the versions of The Great Gatsby we could get our hands on (Jay Gatsby/Alan Ladd, thumbs up; Jay Gatsby/Robert Redford, thumbs down; Jay Gatsby/Leonardo WOW!).

It was a parade of vintage movies interspersed with episodes of All Creatures Great and Small, all-in-all a most entertaining mix of scenarios from the barn to the ballroom! Truly a great knitting gambit (got tons done), except I would be jarred to reality everytime Daisy/MFarrow squeaked on the screen! (Yikes – what a cast, what a bomb!)

But I longed for something that isn’t going to crest on the US scene until this winter: the premiere of Season 2, Downton Abbey. (OK, non-Downtown Fans you can leave the dinner table…)

Skinking around the internet looking for previews, I found this little gem.

And then I found this:

And I found something rather silly in the middle of it that made me hoot! 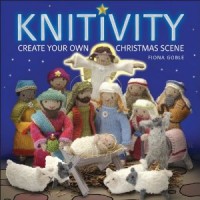 So this inspired even more silliness…

Find the *special* character in the video above and put the time it appears in the comments below to enter a draw for a new book with knitted toys:

Knitivity: Create Your Own Christmas Scene

…WHO can resist a knitted little DONKEY!? or lambie or angels or ox? Includes directions for 3 wise men and a cut-out creche and more!

And who knows, with a little tweaking, one could fashion themselves a happy little dollie of the Edwardian type instead — instructions included for a basic little doll that can be dressed any way at all. ;p