At last, spring is on its way…

We’re celebrating here at Studio Chic Knits with a lovely,
lightweight hug of a cardi 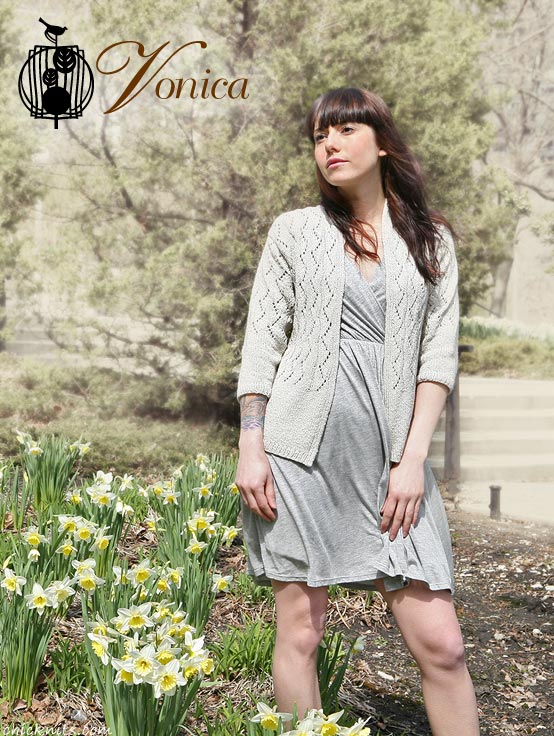 The sun was warm but the wind was chill.
You know how it is with an April day.
~Robert Frost

Knit in one piece, from the top down, using DK weight yarn knit at a worsted gauge.

Instructions included for both long sleeves and a sleeveless vest version.

Time for another edition of I Knit You Knit! In the tons of emails we get everyday, there are some common threads and questions that land on our desk, so we thought we’d start a segment on ye olde blog for a little of this’n’that from the inbox.

Cast On for Top Down Sleeve Area
Vickie writes: “I am making your Basic Chic Hoodie and I am curious about what kind of cast on you generally use under the arm…and if the cast-on you use adds a lot of bulk. Any tips would be much appreciated.”

La Réponse: We recommend a backward-loop cast on; easy and non-bulky, using the working yarn from the row being worked. :)

Pattern Terminology
Linda writes: I’ve just did the Cable Set-up Round for the pattern but am now confused by the next statement: “Work patterns as established for 20 rounds, following charts as given.”

La Réponse: “Work patterns as established” (sometimes seen as “work patts as est”) is a common knitting term writers use as shorthand when referring to areas in the garment that follow a chart or specific set of instructions given elsewhere in the pattern.

So after the set-up round(s) are completed (ie. “established”), you just follow those charts or instructions every time you come to that specific area. Everywhere else you work the sts according the general instructions for the sweater.

Yarn Requirements
Mary writes: “How many 100 gram balls of wool do I need for pattern Miss BB – it says aran weight is 1200 for my size.

La Réponse: “All the yarn requirements in Chic Knits’ patterns are given in yards per size, so you can feel free to choose a variety of yarns to use.

So if it says 1200 yards for your size, you need to divide that number by the number of yards in your 100 gram ball of wool.

That information is on the ball band or label of the wool; it varies per company and fiber content so you need to do this division with the one you have.

OK. Even though we’re all about the concrete runway on the streets of Chicago, it’s something that we saw on the streets of L.A. that got us thinking overtime! Somebody’s getting a retread, a reboot on the video landscape and the ink wasn’t even dry on the press releases before people started FUSSING.

Right – that’s the Internet for ya, you might say, where even the most innocuous thing you post online might be clobbered by a million and one hatchets, but THIS my friends is important!

For cripes sakes, it’s Wonder Woman! And the brouha is her shiny, shiny pants…

On the left you see her original outfit for the new series, by superhero producer David Kelley, whose pilot is shooting right now. After the announce and release of this shot, fans of the original comic went ballastic!

Even though, if you remember the original TV program had WonWom running around in nothing more than a vegas-style bathing suit, and this one actually looked more like what she wore in the pages of the comics, it was those pants that set off the bombs!

Now this is something I see on a regular basis at my local grocery store (the stirrups in the high-heel shoe thing, oeuf!) but what caused me more of a head desk moment was the nature of the material used in the said pant-ses.

Pardon me, Mr. Kelly, but Ms. WonWom is an Action Hero. She runs, jumps and delivers karmic justice (mostly with her brass bracelets but I digress) and even your film crew might have to deal with the star collapsing during a hot street shoot in those vinyl klingons.

So, either bending to the public outcry (or maybe some day-after road rash!) we see on the right, WonWom in sensible cloth pants (and low boots)! Thank you! Now would you please do something about that top because it is painful to look at…

And, to all the venting armchair comic book heroes everywhere, I suggest you do what I did: go to the store, buy the makeup, go to the convention and have a day! from the Mac counter at my local Macy’s