What is more satisfying than to ditch work and go play with your friends?

Going out of the neighborhood and exploring, say, an Italian menu for a change, for a little la dolce vita in the afternoon?

Then stopping by one of Chicago’s newest playgrounds: the Chicago French Market…

Is it bonne chance that that very same afternoon, you might be rubbing shoulders with L’Honorable himself, Bertrand Delanoë, the Mayor of Paris, here in Chicago for a visit? And would it REALLY be in the party spirit if you only, say, decided to shop for the typical, the regular, the expected?

Or has it now become your duty, your actual responsibility to live up to the moment and celebrate with his Honor?

At the French Market, that mission is so very easily accomplished — there is row after row of stalls with the most amazing foods, wines, beers, meats, fresh vegetables, and, do not forget, cheese.

But today, I have a higher calling and it is to indulge.

Certainly a few hors d’oeuvres will only start the party…

Enchanté! THIS my friends is candy, candy of the highest order, made by Canady Le Chocolatier… Or, how about gelato, in the most heavenly, creamy colors?

NO. It is impossible to ignore one for the other.

One simply must not insult the hospitality of the house! 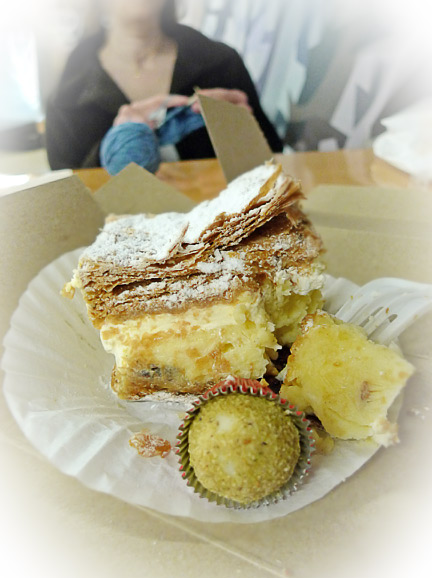 Decisions, so difficult at the start, were so very easy in the end: a superb Napolean with a Pistachio Truffle chaser and a little afternoon knitting with ma charmante amie, Edie…

The convergence of spring-like weather and digging in the garden (finally) is casting a happy vibe all over the place.

Somehow, being positively productive in one part of my life rubs off on the rest and a whole bunch of stuff gets done. 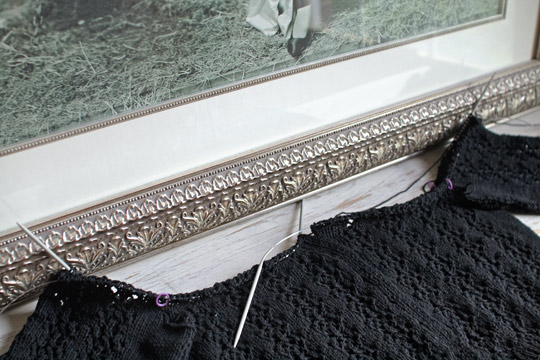 I didn’t have a really long circular needle but I did have a BUNCH of shorter ones (who knows why) and I’ve split the stitches across three needles and am knitting with a 4th.

Sort of a Super-Size DPN set, but flexible. It is the bomb!

I had to laugh thinking about what I posted the other day — that I’d knit five Basic Chic Hoodies — because once I started counting, I realized this is my fifth CeCe.

So I took a portrait of them to celebrate…

Yarns used, from l. to r.: Cotton Fleece (which gives a slightly larger result); Rowan Calmer (washed a lot and has shrunk up a little); ggh Bali (one of my very favorite yarns why the h*L* can’t I buy it at the corner store?) and last but not least another Calmer one, with short sleeves..

Looking at these makes me want to go do some closet diving and find all my little spring dresses and get them ready-to-go! Good or Bad? Living in a truly four-season climate means you have LOTS of clothing — at least Hot & Cold — which can be layered over or off to make the 2nd & 4th seasons behave.

The diff is, for me any way, is that one set is stored while the other is in play. Time to go and get Team Spring/Summer ready for their close-up ;p

It’s spring fever. That is what the name of it is. And when you’ve got it, you want – oh, you don’t quite know what it is you do want, but it just fairly makes your heart ache, you want it so! ~Mark Twain

Nothing as freshly danceable than getting to the end of the knitting. Or almost. 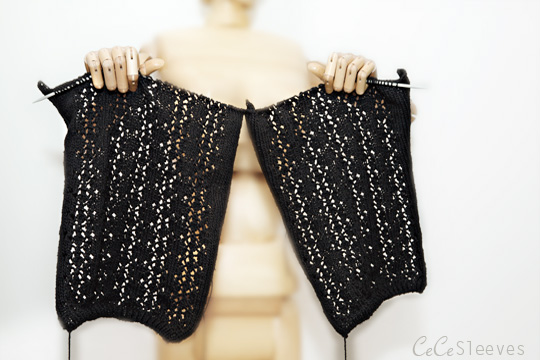 Indeed, they are not “really” finished because later today, they are going to be joined to the Body section that’s been languishing in the stash basket, all lonely-like, for way too long. Then the yoke knitting begins as the whole kaboodle makes one giant piece, with raglan and v-neck shaping continuing.

Time for couple of thoughts to land in the Chez Chic Archive of Splendifeorus Knowledge and all that:

In my earlier designing days, my in-the-round (or one-piece) knitting, was from the Bottom Up, where you knit the sleeves separately, with the pieces marrying into a yoke as above. The garment grew in size to the underarm; then diminished in size to the neckline. All shaping was done by decreasing stitches at the raglan lines and the neckline. There’s Ariann, Beryl, CeCe, ChicKami, Nicole, the Ribby Pulli (which I’m wearing as I write this in the cool morning air), and more.. In other words, a whole lot of this type of styling is in my portfolio.

But, I knew there was more and to get more versatile and really understand the karma of Round, I started designing from the top down, a style that starts with a small amount of stitches and then grows by being shaped by increase stitches to a magnificent volume much later in…the underarm area. One of the most fascinating Chic Knits style to me personally seems to be the Basic Chic Hoodie with its simple variations in decorative stitches, sleeve lengths, fibers, etc. I’ve made 5 of these and will probably make more. It is, for me, total TV knitting supreme, or the Set It and Forget It Social Knitting project where you could even probably tip a few glasses or mugs back and carry on.

Sidebar: even if I’m just drinking decaf with my knitting pals, I go off-course rather easily. Do not ask about the lace knitting under the influence unless you’re willing to leave your own story below… ;p

So I started going out on a limb and try pushing the TD Envelope, so to speak…

Now, it is not very common to see top-down sweaters with lace or cable patterning included from the cast on. Why? Because at the beginning of the sweater, lots of critical, immediate shaping is taking place. Throw a stitch pattern, even a simple one, into the mix and all of a sudden, instead of a mindless jog to the happy place, one has to Really Pay Attention.

I’ve found that the pattern phrase “work new stitches into established pattern” to be almost as toxic as “and at the same time”. Why? Well, I think learning to “see” the various portions of the garment when you have so much going on can be really hard to do, unless you’re a Big Picture kind of thinker, although, it’s a lot like learning to ride a bicycle. Once you get it, it sticks forever. I think part of this escapes us because we’ve now learned so much of our techniques and skills online. Even working with videos, it’s not the same as being shown by another knitter.

I sometimes wish I could just sit down with the people who email me with a problem because it would be so much easier to demonstrate what the matter was than trying to explain it in writing. One recent email asked me to write the entire pattern out line-by-line for them, but I knew, in the long run, this would not really help.

I constantly tell people to move away from the knitting, meaning, step back and look at the whole, then inspect and finesse the sections where stuff is going on.

I call this the Global, then Local Effect.

And I know, being a person who really likes to cook, how one can become a superior multi-tasker, just given the time and practice.

But it all depends — running with this meal metaphor because I haven’t eaten breakfast, yet — if you want fast food or the extraordinary.

I’m back to my Bottom Up roots with this project. I chose to knit the sleeves flat because I’m convinced I don’t knit smaller lace tubes very fast at all and I don’t mind a seam. And I know, once I join them to the Body, working the shaping of the Yoke is going to be as close to Set It and Forget It as you can get, with this simple lace pattern. Instead of having to multi-task the working in of the lace, I will be gobbling up those stitches by decreasing until just a few remain. NOM.

I better go eat something now…Cheers!