A different kind of olympic event is going on even as we speak: it’s Fashion Week in New York City and I’ve been doing a little half-pipe surfing around the nets looking at ze Spectacle of it all…

Because I love their slideshows: the New York Times

Because I love their snark: Gawker

Because I need to know what the Celebs wore to the shows: InStyle

Because I need to know what trends to prepare for:

the Return of the Confused/Missing Sleeves

from l. to r. Wang then Lepore (click for show)

Not too on board with the concept. Did you know that Vera Wang designed the competition outfits for Chicago area men’s figure skating champion Evan Lysacek? You can see the very same influences punctuating her Fall RTW collection: lots of black materials, with feather and fur accents. She also offers some reviews of skating outfits from the past in this article with a slideshow on the left…

Because I love reading them:

Although we all know that some (erm, a lot) of what you might see isn’t going to work on most, I am drawn to this dress by Proenza Schouler as worn by model Flo Gennaro: Here’s how the guys (Proenza Schouler / Jack McCollough and Lazaro Hernandez) look who designed this dress: 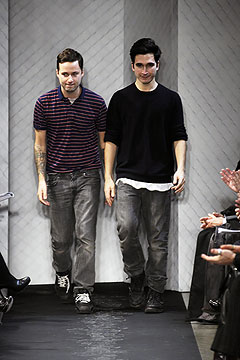 who said they were “mixing New York grit and the “American thing.”

Winter for many of us lucky stiffs in the upper reaches of North America is going on and on and on! But fortune has smiled on us with the excitement of the Olympic games in Vancouver which for thousands and thousands of knitters has been a lightening rod of activity which we are all dancing around, barely feeling the cold…

I have to confess that my viewing has been really emotional this year — don’t really know why — but watching several events and seeing the yes, thrill of victory, and, oh, the agony of defeat has actually made me weep, with full heart and whistling and applause (ask my upstairs neighbor).

What’s been making me all achy breaky? All of the contenders who’ve come back from before, who’ve been trying for YEARS to get a leg up on the podium.

Seeing Bode Miller, who in Turin ’06 was all over the moguls and late night stops (now there’s an interesting Sidebar: Olympic Party Culture), all mature and focused and bronzed was FAB! Seeing Shen and Zhao (and Pang and Tong) set my heart a-thumpin’ especially when they almost took a dive. Watching figure skating is almost impossible for me — it is too exciting at points. I know that the effort you see on the ice represents years and years of sacrifice and it is almost too much to bear. The story of Yao Bin, their coach, who was inspired and motivated by his own huge public failure, stood on the sidelines, his eyes just brimming with the kind of success that revealed the bittersweet steps that took place to that point.

Sharing Alexandre Bilodeau’s gold medal was sharing it with his family, his beloved brother with MS who’s been his co-pilot forever, and with Canada! I love you guys!

With all of this sentimentality, I had to wonder what I was doing the last time around. Funny thing, something called tag CLOUDS were a little popular right then — where your site is crawled and the resulting word densities end up in a graphic. This was from my site during the Winter Olympics of 2006: But boy, oh boy, once we mopped our eyes yet once again, are we getting some knitting done (I was especially fast during the Snow Boarding — jump high! go wild! :) 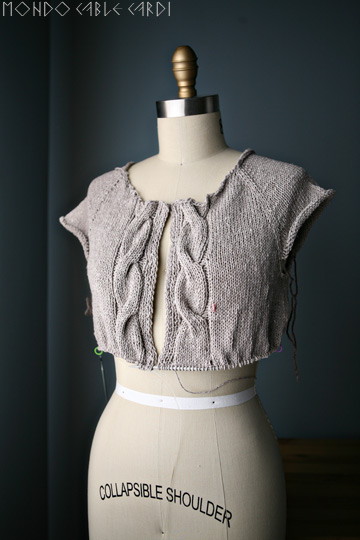 In addition to my Top Secret Olympic design quest (waving to all knitters out there!), there was a flurry of rowage on this cardigan. Something about the ability to just go full-blast through the Stockinette Body is just perfect for competitive knitting.

And there’s the promise of Springtime in there: the yarn is a cotton/acrylic and is knitting up into a nice crispy fabric that should make a cool Shorty Jacket quite quick now…

…from Milan Fashion week a couple of weeeks ago