OK, I’ll admit it. I’m more than a little thrilled to be celebrating New Threads at the magnum opus of the New TV Season! I love Fall! I love the plethora of the new fall shows!

Nothing like a little drama & visual stimulation to get one’s juices flowing and needles clicking. But of course, coming from where Drama is everything — from our flamboyant ex-Guv to our out-of-bounds Rapper West (you stepped on a kitten!), in Chicago, you just can’t escape!

At least, I’ll be able to slip into my new cap-sleeved vest just in time for the show. I intend to wear this over a turtleneck or even another sweater OR although I haven’t tried it yet, over a light jacket. Vest as capelet. 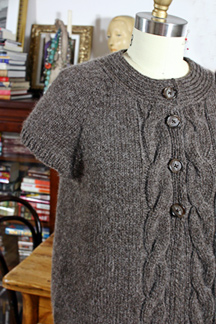 This little number is the cap-sleeved version (included in the pattern) and it is very soft and inviting now that it’s had a bath. The yarn bloomed beautifully and the color (Natural Dark Grey) is one of my all time favorites.

Also different this time out? I made the collar half the size as the pattern stated.

For all those Mondo Cable Cardi-ers out there, there will be a PDF sent soon that outlines how this is done (if you got it at your LYS, please ask there for a copy of the Mods).

There’s just a hint of cool in the morning today, so I’m off to give this a test run :)

In my incarnation as an intrepid girl photographer, the daily grind often includes stops for Road Food!

And IHOP was putting the “i” in fine international (!) dining long before tunes or books or work, and it’s many a day where I’ve eaten Breakfast for Dinner (Breakner? FastDin?) and enjoyed some pancakes (and sausage). I blame my Dad, who thought Pigs in a Blanket were top fare any Sunday morning.

But when I saw these

it gave a new meaning to pigskins! Even though this will probably set my backfield in motion, and not in a good way, either, but I cannot resist.

But is football-shaped french toast better than dinosaur-shaped pancakes? What’s your favorite shape?

Even before I get to the end of a project, I sometimes sneak a little.

No, I don’t cast-on for another knitting crush although I must confess that’s my usual MO… ;p

Oh no, instead, I sometimes pull out the ironing board! (And those of you who have room enough to leave it out all the time, I salute YOU!)

Adding a little steam and pressure to a WIP can be one of those make or break moments. Done early enough, you see the real nature of the fabric you’re making, the bones and lines all in place, behaving as they should.

But if it isn’t too your liking, then it’s Off with It’s Threads! Life is just too short to be knitting something that isn’t behaving early on…

I pre-pressed my Mondo Cable Cardi a while back and yay, it received a thumbs up!

But now, that all that remains is the weaving in of the ends and buttons, and it’s time to Press for Real. 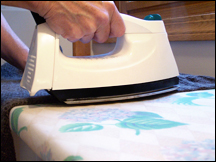 We going to start with the bottom edge. This garment has a type of ribbing that controls the rolling but doesn’t constrict as much as normal ribbing. However, while the knitting is going on, it tends to flip up a bit and want to go north.

By applying a little heat to the edge, hovering ever so slightly above, the flip is flattened by blasting it with the steam from the iron. If your fiber can handle it, it’s OK to press this area just as if you were pressing a shirt, lightening up on the pressure and scrubbing motion you would normally apply on something as heat resistant as cotton.

A Light Hand is OK for this type of wool and is a favorite British finishing technique. 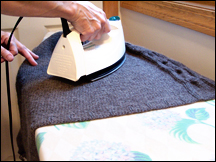 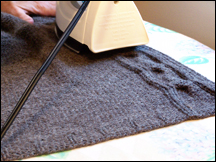 After the hem is steamed, I press the body of the piece, again, with that “light hand”. Then I do the front edges and the mondo cable.

You can see my hand at the top slightly spreading out the puckering of the cable on the reverse side. The goal is to flatten it out just enough to retain the defintion of the cross but to have the cable lay flat and look fabulous.

Next time you see a cabled sweater in the wild on the rack in your favorite store, check out how flat the cables are on commercial sweaters. They are pressed. 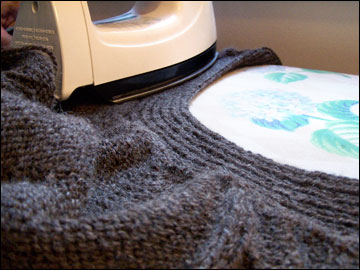 Now it’s time to do the neckline, and I pay special attention to where the neckband meets the neckline of the body of the garment, applying a little more steam (and pressure, if the fiber can take it) to this area. This flattens the join and really makes the neckband look professional. It also “sets” the stitches as there might be slight variations around the curve. This balances the arc.

Then, with all the pressing done, all that’s left is to weave in the ends (which I sometimes do before pressing but the Weaver Muse is out having coffee or something this morning and has abandoned me) and then sew on the buttons & snaps.