When Knitting gets Rudely Interrupted by an Elected Official

I’m so exhausted by the whirlwind PR hurricane going on over here, I’ve been barely able to pick up my stitches!

On Monday, our Governor, the esteemed G-Rod, went to New York City to plead his case to all of YOU, appearing on the View, GMA, and many other shows over 72 hours. How did he do? Do ya love ‘im more than yesterday? Did you want to ruffle his hair like Joy Behar? (Not me, who yesterday had to stand outside in 5 degree Chicago weather for 6 hours waiting for him to come outside and make a statement).

Today our governor goes down to the Capitol in Springfield and addresses the Senate Body, completely reversing his intention to not appear. Many hope he refrains from any more Cowboy explanations for his behavior.

Many think he’s more inline with his real hero, Elvis (who before his arrest was the ONLY mentor who he talked about and quoted constantly) who, as I recall, sort of skidded to a rather ingracious exit via a toilet bowl.

Why can’t you see
What you’re doing to me
When you don’t believe a word I say?

So, if an old friend I know
Drops by to say hello
Would I still see suspicion in your eyes?

When honey, you know
I’ve never lied to you
Mmm yeah, yeah
…words & music by the fabulous mark james

January 29, 2pm, doing the Last Waltz with His Honor 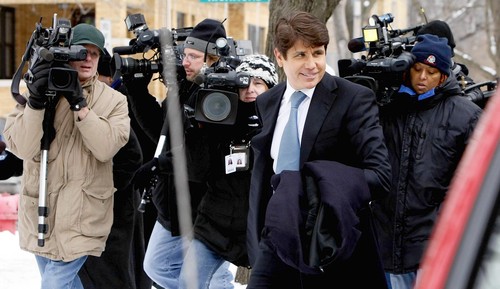 …photo by my friend Phil Velasquez 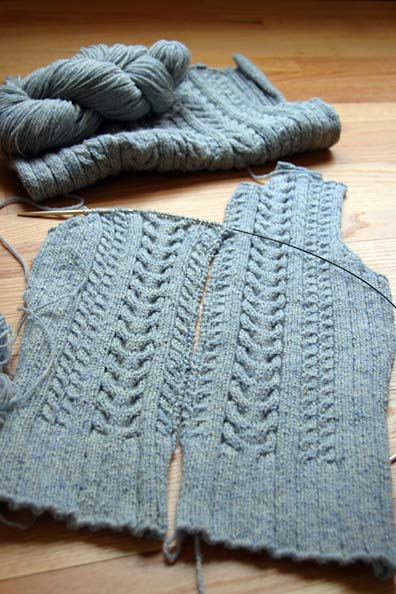 What happens when you’re in love with the colors of Lake Michigan? I daydream about it knitting this sweater. (Of course, it’s about 70 degrees warmer in my fantasy, it being almost zero degrees again this morning…)

This yarn has many shades of blue running throuhout the yarn lengths. Some heathers might have a contrasting or complimentary color carded in, but this one is all blue and natural.

It is also a little off. I was so excited about getting the Right Front almost finished. Then I took this picture and the Left Front is noticeably cooler in tone. Whoa. The natural base yarn is whiter and the others with a more yellow tone make the fabric skew slightly green. I didn’t notice this when I got the yarn, a mail delivery, just put it on the shelf. (It had no tags on any of the skeins.)

SO. When I finish this front (24 rows and counting) I am going to pop them both into a bath and see if it all comes out in the wash. [Probably not, but the only other choice is FROG POND and re-knit!] 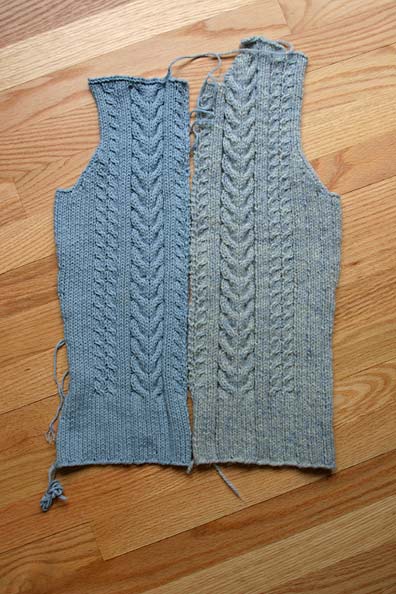 When I was swatching for Cassidy way back in the R&D days, I made a *swatch* out of cotton to see if I’d like it. It turned up the other day in an apartment sweep for something else, so just for the heck of it, here they are side-by-side, cotton to the left. The Cotton one is made in a smaller size but the gauge holds up and so do the dimensions of the cabling.

I am very tempted to start one out of cotton when I finish the wool one — having a stash of Charcoal Cotton Ease (Hey Emily, got any black laying around I could poach?) I also stumbled upon while closeting some other stuff this weekend.

This is a True Story.

Watch for my upcoming award as Best Supporting Actress for my Zipped Thin Red Line Lip reaction to same unlike our Mayor who when asked at a press conference to respond to Blago’s Wild West Rant just chirped “Cuckoo!”

(And yes, we thinks Anderson Cooper is a HAWThottie!)

Edited to add: For the Love of Pete! Anybody see him on the View this morning!? He exasperated Barbara Walters to the point she looked like she had a mouth full of month old milk!

So he appears with the ladies there, then gives an exclusive interview to another female reporter from NBC: me thinks he thinks he’s god’s gift to you know…