It’s funny how one can go years and years without knowing something important about someone close. Back in 2001 when I started writing this blog, lots of my friends didn’t really know about my knitting. Every once in awhile, a new sweater might push their WOW button, but the knitting, it was done behind closed doors, solitary and without witness.

That all changed for me when I started writing about it online. In the grandest of internet tradition, people almost immediately found each other and all of a sudden knitting was out there and we brought it to the coffee shops, the buses, the public way.

My one friend, L, was not online (or knitting) and was always ribbing me about doing both. I’d been taking design classes at Chicago’s SAIC and met all sorts of other scoundrels who were face first in a monitor, intrigued by the trip, enticed by the menu. But one day, she fell into the rabbit hole and little alice has never been the same. Now she was telling me to lose the dial-up and get with it. She had DSL and I was a slow monkey, a throwback.

A couple of days ago, there was a big package from L sitting on my front porch in the rain. And I found out something about someone that I never knew. 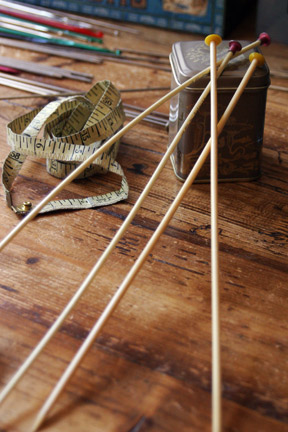 The box was filled with vintage knitting stuff, maybe 50’s? maybe earlier? It’d all belonged to L’s Mom (and maybe her gramma). She was helping her mom move and thought I might like it.

Now L’s Mom was what we called “my Chicago Mom”. My tribe is in Michigan & California, no connections, no blood here. But L-Mom took me in, fed me on the holidays, made me less lonely in the big City. She had two sons; now she said she had two daughters.

And I discovered she had something else: a love of knitting!

I could tell by the curve in some of the needles, someone had put the pedal to the metal… 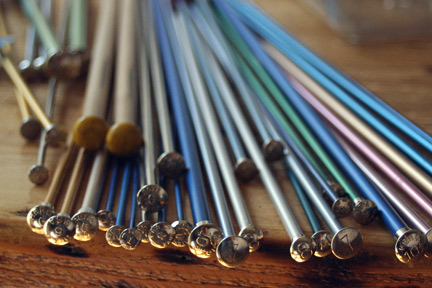 Every size and type of needle went through her hands. From the brightly colored Chicago Boyes, to the plastic(?) or bone(?) ones marked “Crowley” or “Chester”, they told me a story. 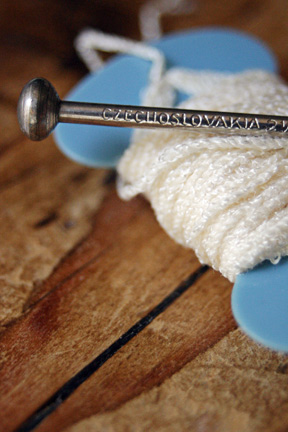 Along with the pile of tiny bobbins wound with multi-colored yarn, those needles declared this was one serious knitter. This was someone who’d been at it awhile: the needle above was what I think they call “pins”, very thin very strong steel. 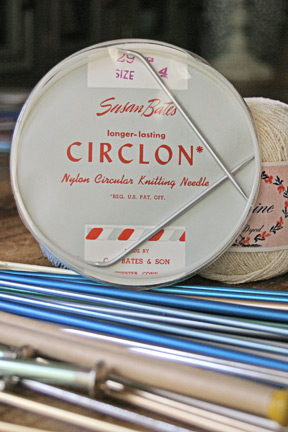 There were all sorts of circular needles too. Some had very thin coils made from what looked like springs and they were tipped with the same pin-ish steel tips like some of the straight needles in the box. And who would disagree? It really isn’t a party unless Susan Bates is invited and there she was! All wrapped up in a mod circular box, needles with CIRCLON cables: the evolution waits for no one when Plastic was King! 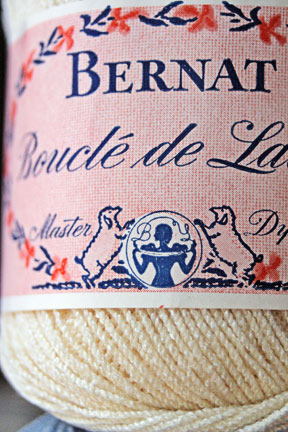 Contrast that label with this one. Here we have a quasi-traditional crest: instead of Lions holding it up, there are chubby sheepies doing their tribal duty. They look happy and proud to me although the lady in the crest itself appears to be looking for someone to help her wind that skein of yarn she’s holding. No help there. 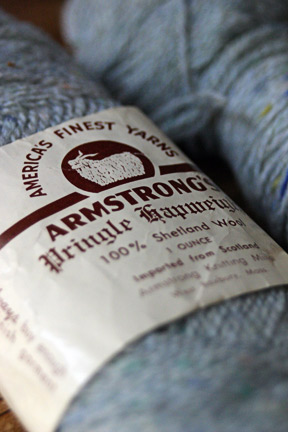 Now comes my favorite: TWEED! Here we have the clans Armstrong & Pringle repping something called “hapweight”. I had no idea what that meant but found quickly that “A ‘Hap’ is a warm, deceptively simple, lace patterned shawl traditionally knitted in Shetland”. 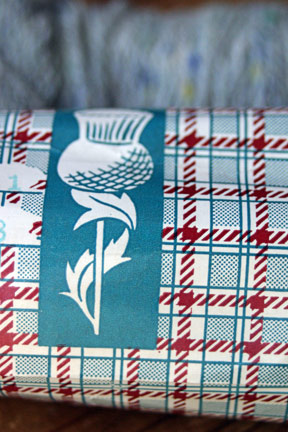 Another label was marked with a lovely little thistle (and love that plaid!). Now this flower stands in my personal annals as one of the only shapes I actually knit into a sweater and liked while doing it! I love seeing them anywhere, field, paper or yarn. Scottish Thistles. Beautiful.

Seeing it stirred me and made me lonely all the same. While I could touch with wonder these things today, there would be no talking about the treasures with the knitter who they’d belonged to. L-Mom had moved along, into a new place, a place where there wasn’t going to be any knitting anymore. She can’t remember who I am these days; when we last had a birthday lunch, I was just a pleasant new friend of her daughter. She told me I was a pretty girl and patted my face and I held her hand and remembered.

The truth be told, I’ve settled into a routine.

My friend S. is a writer, a very good writer. She is also an enabler: over the last two months we’ve been furiously playing Scrabble on Facebook (I’m bonnemarie).

She routinely kicks me to the curb; sometimes by hundreds and hundreds of points.

Well that’s all over now!

And right about the time I put on my BGPants, we started playing Wordscraper instead.

It lets you pick the values of the little placement thingies or will make a random board for you. We are playing on one board where they have almost no value at all. Score: S/233; me/194.

But look closely at the one above and if you do some exploratory math, what happens? 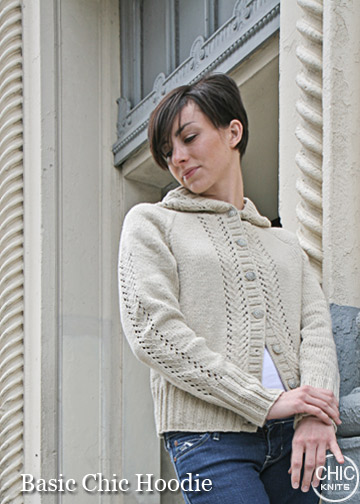 The Basic Chic Hoodie is our sassy take on the classic sweater we all love to wear. Instructions for plain and lacy-trimmed versions included.

Knit from the top down, this cardigan uses popular worsted weight yarns and looks fabulous in wool, cashmere, alpaca, cotton or blends. 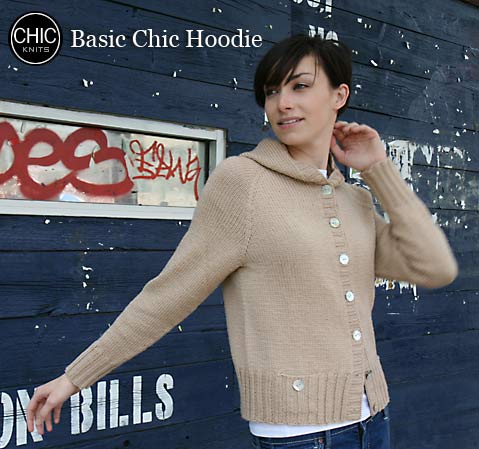 Comments Off on Now Available  |  Permalink