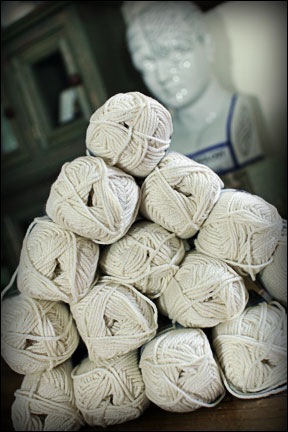 It may still be chilly (19°) but it’s just not too early to test some Spring Yarn! In my many travels, I like to pick up a skein here and there of new fibers especially cotton microfiber type yarns to try out.

This is a boatload of something called Jeannee (Plymouth) which I bought online recently.

Many of the patterns in the Chic Knits portfolio are written for worsted weight yarn. Now I use that phrase with caution because it means many things to many people, including the Experts. The CYA Standard Yarn Weight System calls it:

19/24 is the ball band gauge of many British Isle & Canadian Aran yarns — so we’re covered by the Standards — and some domestic yarns. Elann, a favorite domestic yarn distributor, posts this stitch gauge on the ball band for their Peruvian Highland Wool and I agree.

This gauge makes a quality tensioned fabric and correctly sized stitch for the diameter of the yarn.

There’s lots of yarns by Rowan, RYC, discontinued Jaeger, Briggs & Little, and others that ball band to that count.

I’ve written before that, like the Standards above, the given ball band gauge is just a Guideline. Sometimes it is spot on but other times the manufacturer gives a range on the band that might need further interpretation to optimize the yarn performance. For example, another CK perrenial fave, Cascade 220, lists BBgauge as 18 to 20 sts per 4″. No row gauge is given. However, I bellieve this yarn behaves best at 19sts/24 rows, as above, with #7 needles.

Cliff Dive #2: you’ve certainly read this phrase on many patterns “OR Needle Size Required to get Gauge”. My recent experience knitting both my wool/cotton Eyelet Cardi and the Cotton Fleece Ribby Pulli showed me the beauty of going up and down a needle size to match stitch size when switching from flat knitting to knitting in the round. I also took advantage of Needle Brand/Type to achieve *best fit*. I’ve seen, for example, that a size 6 needle made of nickel gives a different gauge than a bamboo size 6 needle.

In addition, I’ve found that wool yarns listed at **sts per inch might behave differently than their suggested equivalent plant-based yarns. So the Cotton Ease I have might knit to the CK worsted gauge of 4.75 sts per inch using #6 needles instead of #7’s or for some folks who’ve knit the Ariann design from CE, #5’s.

So I’m going to expand my Swatch to go from #5 to #8 for the above cotton/microfiber yarn. I’m going to use Addi Turbo (nickel) needles. Here’s what I’m hoping will happen (measured over 4″): 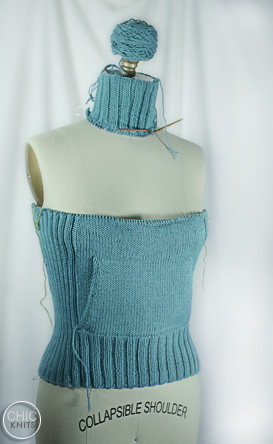 Whew! Move it! All the way up to the Armscye! I re-knit the kanga pocket with a needle one size smaller than what I was using on the Body and all is well. I couldn’t wait to see how it played out so I hit it with the steam iron…

I love to press.

Giddy with cabin fever, somehow putting my first wee sleeve around the neck of Mistress Mannie just seemed right; I thought it ironic that it looks so natural there and am just itching to go measure my neck circumference now to see what’s up with that :)

This is going rather quickly now that I’ve finished the purple Eyelet Cardi. Aye, but does the Cheese Stand Alone!?

I always admire those who knit one thing at a time to completion, in fact I adore them! But I know that will never be my future. I exist in the exciting multiproject universe where no number of WIPs is too high!

There are all sorts of half-bakes all over this cabin, some pretty close to finishing, some recently arrived RAW…

Now, even though I know better, I watch them every d@#% year. This time I even watched the BWalter interview show because I wanted to enjoy the ironic juxtapostion of old school (Harrison Ford/his earring) & new school (M Cyrus and her new upper lip) stylings.

But it wasn’t until the Best Supporting Actress Category that intervention was really needed and although it is sent long distance from Chicago it comes straight from the heart:

“Dear Tilda, I am only one of your biggest fans but I’ve adored your acting for years now. On behalf of Redheads everywhere, thanks for representing. But, after you got the first envelope (uh, the one with the invitation), you might’ve called me! I would’ve dropped everything and flew out to L.A. and gone shopping with you. I know how you must hate it.

It was beyond exciting when your name was called but when you hit the stage, it dawned on me! Your dress got caught in your limo door and because you overslept, you had to run for it and both your sleeve and makeup got left in the car!

Darling, it could’ve been so much easier. Let’s call our buddy next time and your Chicago girls will fix you right up…”