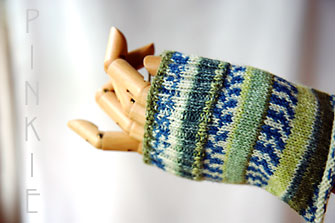 Now that I’ve completed that silly Finger Quiz, I’ve noticed that indeed, I lift ye Pinkie, unconsciously, into the air any chance I get — drinking a cuppa, tying my shoes, and oh, blow-drying my hair.

I thought myself a common man but this one little flag salutes the snob in all of us, no? Yes! I watch Masterpiece Theatre and accredit it as High Culture! But tickling it was to see a scene in Bleak House where Guppy, a social climbing lawyer, raised his pinkie with purpose while drinking a cup of tea with his betters, as if that one act alone would make them live in a parallel society.

I adore Charles Dickens. I’ve been slowly working my way through his writing, which I find as fresh today as when he walked.

I suppose one had maybe, hmm, two or three pairs of socks back then, if you were fortunate — cost: 1 shilling, 10 pence (“It has been said that in 1800, not one person in fifty living in England wore socks, but by 1900 not one person in fifty was without them.”). But what DID the common man wear? I wonder if there was a street market equivalent of the Six-Pack Freeway Sock Guy in the Victorian Age; we have them, now that the weather is good, at many ramps across town. You can be stuck in traffic, get cold water, a pack of peanuts, and a six-pack of white cotton socks. I promise this is true. I promise I will get a picture of this.

Until then, you will have to go wallow here:
— Sock Timeline
— History of Socks Japenese-style
— the History of the Sock Monkey Whether it’s a resurrection or not depends on how you do the math — like maybe re-starting something that was barely started at all should count, right?

I was working on this green CeCe last year around this time and stalled [mental block on knitting sleeves in-the-round].

Rippit/rResuscitate and we have 2 flat sleeves! [I didn’t actually knit them on the same needle but put them there to hold and wait while I finish the Body of the garment.]

I cast on for that yesterday and have an inch and a half done so far. RISE!

Rise as fast as bread! Rise fast as the weeds growing in my back yard I say!

We are in the process of re-doing our *landscaping*. What passes for organized bushes and other green stuff is a compilation of old and new — the stuff the developer/builder threw into the ground a few years ago and stuff we’ve been adding as we go.

It is way less than ideal, especially the original stuff — trees planted smack dab in the middle of the yard, in incorrect conditions so they couldn’t thrive or just the wrong kind of plant. Really. Got to. GO.

This last weekend we had a fellow come in and take out a monstrously huge Privet hedge. While this can be a great fast-growing bush, in a small profile area it just takes over. We could barely open the garage entry door or walk between the houses without being bussed around the head and shoulders by a hedge so bloated and huge one did anything to avoid having to walk near it. Our tree fellow made short work of it with a chain saw but disappeared half-way through the job.

This is not unusual in the Big City.

Finding coherent workman who will Get It Done like they say they will is almost a miraculous occurence. We thought we hit solid gold because we saw this guy working on our neighbor’s stuff. Hee. Different day, different sh*t. He not only didn’t finish our job on the first day, but left a fair amount of cut branches in the street blocking parking and maybe scratching cars going by. I went out and piled them in the parkway and just started to churn.

Who thinks the Fellow actually returned my phone calls? [I have a bridge I’d like to sell you!]

Instead, his wife calls at 10am Sunday morning (sorry our truck broke down) and says they’re on their way to wrap it up and I’m actually happy because no one will have to be telephonically flogged (which BTW, I do rather well). I’m skeptical but show up he does — with a rather shady guy who looks like he came straight from the deck of the Black Pearl — dirty scarf around his head, glazed, greasy skin, 5 o’clock shadow at 11am! But he also has a Machine — one that gobbles and dissolves the stumps they left from the day before. And to make nice, my fellow manually digs up a stump too close to the house so he won’t kill the surrounding bushes with the Stump Buster wheels. All is forgiven. All that remains are plans for the fresh and new!

You Are a Pinky

You are fiercely independent, and possibly downright weird.
A great communicator, you can get along with almost anyone.
You are kind and sympathetic. You support all your friends – and love them for who they are.

You get along well with: The Ring Finger

Stay away from: The Thumb

What Finger Are You?

Darnit! I always thought I was the Middle Finger (ahem, Middle Child?). Hee. But this cracked me up too – “stay away from the Thumb!” Indeed. 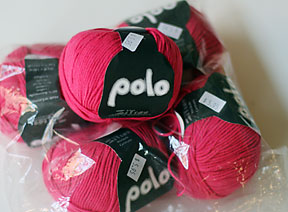 and the WINNER of the WTF is THAT? little Contest from last week?

and may we wish you a huge CONGRATULATIONS for getting your fabulous new degree!

THANK YOU! to everyone who sent in suggestions — by far, the concensus was this should be a bag or blanket — I can see it! Polly from All Tangled Up actually found the pattern. I knew I should’ve called you right away Polly! Well Done! She says it is by Sasha Kagan from Rowan #5 and is called Chequer Flowers.

Here’s some other fun suggestions:

and one I hadn’t thought of from s.Kate: “If you have no attachment to or plans to continue or alter this masterpiece, may I tempt you with something from my stash as a trade?” BINGO! Bring it!