I’m planning a trip to NYC in the next couple of months and have been virtually visiting the place.

This is a total “Two Birds w/1 you know” thing – especially interesting to me are photo galleries (& articles) people thoughtfully publish about their local purview. Urban or Mundane? Not for me the iconic monuments and predictable destinations.

This site takes a little walk on the wilder
eyes-wide-open side.

Then I found GNOMES of NY

mix-it up with a little Chimera from “Lost New York” 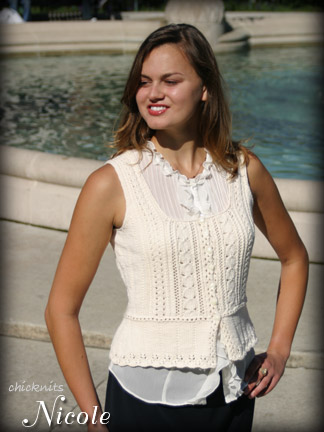 Spring Fever makes me want to feel the sun on my arms but here in the Midwest we still need a little help! Enter NICOLE! Perfect over a Tee or blouse – I’m going to be topping a favorite cotton dress with this as well! I longed for a little corset-type waistcoat to add to the mix – 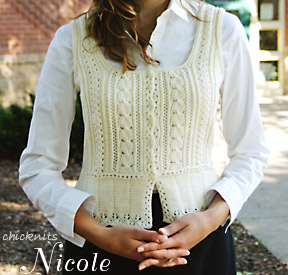 Nicole is perfect for any DK weight yarn – cotton, cotton blends, wools! I’m finishing up a Navy Blue one in wool/silk – destined to be my favorite look over a black Tee.

This easy garment is knit in one piece to the underarm and features a beautiful cabled front with subtle lace edgings around the bottom and front edges.

…the Sock Speaks…
Your Tax Dollars at Work 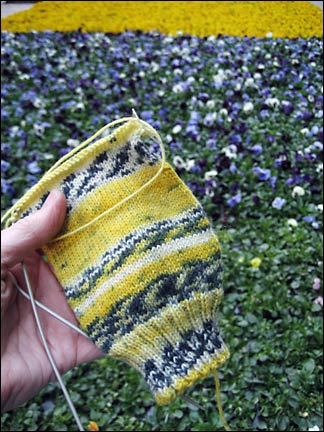 No my pretties, those dollars are not knitting Sock2 – but they are paying for all those flowers. This, a day after Tax Day, startled yet amused me.

As far as the eye can see, in Plymouth Ct. Park, next to the Federal Bldg. in downtown Chi, sit hundreds of flats of pansies, in shades of purple and solid gold. They await their new homes in the giant planters that live in the park. Such old-fashioned favorites – the multi-colored varieties with a face – these were all different tones of purple.

“The first hybrids with dark central blotches (as opposed to just lines) appeared in 1814, and by 1835 there were 400 named varieties on the market-‘beautiful, flat, symmetrical, velvet-like flowers, more than two inches in diameter, magnificently and variously coloured.’ These are the words of Charles Darwin, who took a keen interest in the cross-fertilization of plants. He was working on his theory of natural selection at the time, and conducting his own experiments with pansies and other flowers, keeping detailed records of the various traits that arose through many generations.” …from Burpee

If wishes were horses, I’d like to see the line item budget requisition for these beauties. You just know there is page after page after page of PORK in that budget – why is it thrilling for me to know some measure of sanity interrupted BAU? ;p

Let’s hear it for Pansy Spending and kick that other type to the curb, shall we?