Try as I might to cheat on ’em, I am still loving my simple top down stockinette stitch wheels-on-the-bus-go-round-and-round SOX! These are my Happy Hour cocktail treats after work — my mind empties of the day’s cares after about 2 rounds and then it’s just bliss.

A couple of couples were right over me on the SRO #66 last night. They spied my Eye-of-the-Partridge flap (later – oops – these are just Slip-stitch flaps) and one of the guys says loudly, “HEY! That’s a sock! That’s really cool!” Then he turned to his girlfriend and sighed, “I wish I could find a girl who would knit me socks!” She replied, “I’m sure the campus is crawling with them…” BAdum…

Well, I’m not a bug, but it still goes to show how much LATITUDE there is in the ATTITUDEs about Knitting. Some women, (like me!) are extremely empowered by the craft; others (including most of my male co-workers and a lot of urban women) still think it’s the DeathKiss of the Granny Woman and just jump back from the Notion of the Needle.

What’s really funny, is even the women I’ve met who bad mouth the thought of knitting (remember these are hungry commuters – they’re not thinking straight!~) still stare at my stitching hands with LONGING in their eyes. I know they want to…

Especially this cool Eye-of-the-Partridge (OK where did that name COME FROM?!) heel flap. This is my favorite cushy, long-wearing finish – basically, it’s a row of Slip 1, k1; followed by a row of Slip 1, purl across. I think it’s really pretty, too. 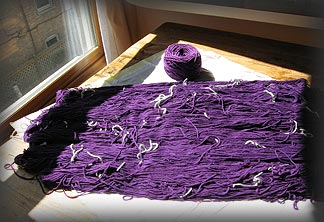 Taking it to the Dye Pot this Sunday, Rachel and I jumped in feet first and just held our breath. Two hours later, we had: 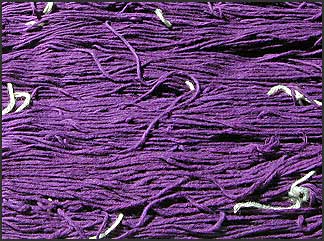 The bright sunshine of high noon illuminates the skeins – they are rinsed and ready for washing here. The color looks a little different because of the high contrast light source and the fact they are WET! It was a very close replication of the sample skein –

– lots of heart (thanks Rachel for all your patience!)

What I learned:
– skein management is really important – limit length to ~26″

– be sure to secure initial end when making skein

Overall, the process went smoothly and quickly. The only downside was the tendency of the wet cotton to want to knot itself on other strands. Think wet shoelaces – we spent a little extra time untangling some scary looking snags at the very end. I had to take a deep breath and listen to some Jimi Hendrix (Voodo Child) before continuing…

A little judicsious teasing, shaking and rinsing, made everything smooth out and become quite lovely…

flip the fug coin and you get…