We’re back in the sweater saddle! Even though it has been below 40degrees, even though most people in North America would consider THAT Cold, even though I have been living in my Long Johns or something similar when indoors (around this time of the winter, I think your average Midwest person resembles a gnarly character in a High Plains movie, where we’re all stuck in the cabin unable to do our laundry) – it hasn’t seemed like Winter to me.

My wonderful neighbor added to this illusion by gifting me with a Cactus for Christmas. I added this lovely succulent to the mix. 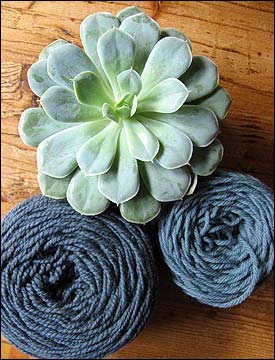 Isn’t this a lovely Color? The Teal Tonals here make me sing with delight! I had a garden once that had a little warm micro-clime area on a south-facing wall. I loaded the bed up with silver-bluegreen perrenials and succulents. These are perhaps my favorite plants of all…

Oh. There’s yarn in the picture too! I am still on a little hat bender and we shall see what we shall see…

Knitting is NOT the New Yoga… 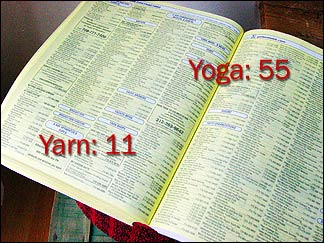 WOOT! The first Finished Sweater of 2006! Just in time for a weekend romp – the Kidsilk Haze ChicKami…

I have to nod ye olde noggin’ towards Spencer at Letizia’s for providing a Finishing Vibe last night @KIP. He is their barista and also a wonderful musician and previewed his new CD for us while we stitched. Very NICE! Many thanks…

I have to admit, I was a little scared to mattress stitch this – don’t know why. But of course, here’s where I venture a guess: the Kidsilk is so skinny and slippery that I thought there would be Control Issues. Well, I don’t need $$$$$’s dollars of PsychoThr to understand that I have enough Control Issues already and surely don’t need a tank top to be pushing me around.

A mere Cupcake, juice and CD later, and we had Lift-Off! WHEW!

And there was joint rejoicing in KIPville last night as well- D wore her new Lara cardi and it is DIVINE! It has inspired all of us – Corinne is already well on her way into a luscious blue one made from wool/hemp. I am so tempted – we all decided All Women Look Wonderful in BLUE! Especially the subtle handpaints these sweaters were made from.

…Speaking of Variegated Yarn – I was pretty satisfied with the color striations in the Kidsilk Spray. There was *splotching* in a couple of places – but it added, IMHO, an interesting design element overall. My favorite place was on the skinny straps where it checkerboarded neatly, on both sides. (As always, if pooling pushes your buttons, you can use two balls of yarn and knit alternate rows. I’m doing that right now on a Manos cardigan that’s in the sample stage…)

[miniHAHA: bet you might know some famous SPINNERS – yo, T. Cruz!!!]