Going through my winter hats yesterday to get ready for the Big Chill ahead, I found a dirty, crushed up gem. It’d been laying fallow all summer, waiting for the fallish rains to wake it back up. It’s Black and is just too hot for summer duty but perfect for the low grade sun of Autumn.

SO on it goes. And Stays. Through Breakfast. Lunch. Dinner. Ball game.

Ball Game? Oui! At 7pm at night, it is still on my head because said hat, dear friends is a WHITE SOX hat. For some reason during the day, this dirty number has distinguished me from other Chicagoans – those who the South Siders are calling casual observers, johnny-come-latelies, fakers! or worse. Who knew that perhaps the greatest rivalry between ball teams wouldn’t be with the team actually in the World series but a team in the SAME TOWN! A guy hissed at me the other day, “You’re a Cub fan aren’t you, I can tell…” like it was branded invisibly on my head.

My Answer: “DUDE! I’m a CHICAGO FAN!” And I’ve got the hat to prove it…” Not for me the ridiculous boiling rivalry between the boys above and below Roosevelt Road!

This magical Chapeau did not protect me from the game itself – a WHOOPER! It started late and went ON and ON and ON and my nerves could not take it – here in the chilly night on a Tuesday! a *school* night a night without excuse for the boss for showing up hosed in the AM because of those PM deeds of bravery and excess damn the consequences – I’m a FAN! But I’m a chick for chrissake and that just don’t FLY… So I was driven by the 4th inning to do what any sensible person would: I pulled out the Dye Pot. I decided to brew us up a victory! I could adjust the color temperature of the cotton Ribby I was working on. Its green was not the GREEN! I wanted to wear and it was going on and on lanquishing in the work basket mocking me like that Cub Fan from the North…

Grinder Ball Ruled as I stirred and stirred hovering over the pot for the first 20 minutes of the immersion effect. My nerves were such that when the SOX pulled away and started handing out whompass in droves in the 5th, I was standing in the kitchen, knitting an actual SOCK! while watching the TV in the living room, stirring my sweater every 5 minutes. 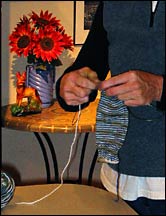 And the game went On and On and ON!

And I turned a Heel!

And I Blocked the GREEN! Ribby! 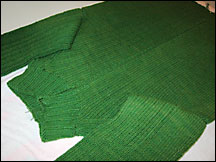 And I fell asleep in the 9th when the score was tied!

But indeed, the hat was still on my head this morning when I woke up and read:

Ode to Geoff Blum: All over the city, The People are taping White Sweat Socks in all their windows…

“The 5-hour, 41-minute game was the longest by time in World Series history and tied for the longest in innings.”
…Chicago Sun-Times
It ended after 14 innings, with a Blum homer,
at around 1AM this morning…

the Six Stitches of Separation

One only has to romp around some blog rings to enjoy the fact that there are now OVER 900 KNITTING BLOGS out there! WOOT, people – we are a Phenom! (But you knew that…)

AND, one of the best things about that is the day (and it will come) when you get to actually Meet Up With other bloggers~!

Last Thursday, at the Wicker Park KIP, the lovely Michelle brought her fine friend Susan. Well, it turns out that Susan was her Secret Pal and was visiting Chicago with her hub on a conference.

Well, Susan is also none other than SUSAN! (I’m Knitting as Fast as I Can!) from Project-Give-a-Little, the wonderful knitter’s effort contributing huge funds to the Red Cross Katrina effort. Along with fellow Salt Lake duchess, MARGENE! they’ve collected over $100,572.81 and ran a very cool prize raffle, to boot. THANK YOU SO MUCH Ladies for all your efforts, time and elbow grease you put on THAT wheel to keep it turning.

Madame, your charm and fun was contagious and we all had a wonderful time visiting! I especially enjoyed talking about the Black Water Abbey yarn to make the notorious Black Aran sweater I have doing laps in the idea lane in my brain.

BUT WAIT! There’s more! We were joined by a new friend, Lauren, who just moved up here from D.C., who came via Theresa and now joins the fabulous Dana (also from Washinton) in the KIP circle that evening with Corinne and Rachel, the best yarn enabling buddies a girl could hope for! We all had a super fun GabFest about everything from knitting to the Pentagon! Stir in a little mocha-chino and a muffin and VOILA! A perfect evening!

seeking: knitter with the orange wool ribby shell at the Harlot signing – I’m a dork and lost your address…

Chic Knits perennial favorite, the Chicago Craigslist, has become a hook-up rally for folks just insane to go to a World Series game…

SOX GIRL: “We are pretty, smart, fun girls who happen to love baseball. We promise to be great company and the best ‘accessory’ your box has seen in a while. We’re in for a good time [including] beers, dogs and baseball, but we’re not whores. So please don’t respond asking us what we are willing to do for tickets. Having said that, who knows what could [happen] after getting caught up in Sox fever! Send us a serious offer and we’ll reciprocate with a picture.”

SOX BOY: “Girls in tiny Konerko T-shirts who appreciate Grinder Ball — sac bunting and hitting behind the runner — are immensely hot. Impress me with your Soxiness and drinks are on me Saturday night. About me: 5-10, 180, been told I look like a skinny Bobby Jenks, if that’s even possible. Favorite player is Podsednik.”

WOOT! This was all found here – scroll down to find, (& recite), the Fan’s Pledge of Allegiance…