OY! At the beginning of my personal Socktoberfest,
there were 4 little socks…

and at the end? 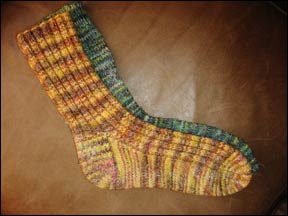 it is TOO BIG TOO BAGGY TOO SCAAAARRRRY!!! 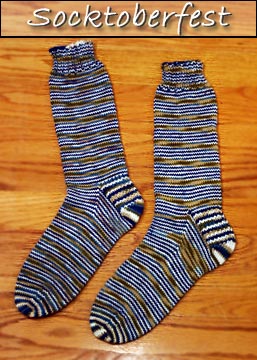 These bad boys are Fraternal Twins! One of them has more blue and white stripes than the other and what’s really weird is that I didn’t notice it until I took this picture (Reason #1 why I love to record my projects, although it can be PAINFUL!).

And am I whacked over it? NAY! If I ever am wearing them with a skirt (it COULD happen) and find someone staring at my ankles, I’ll have to give them that Global Warning you give someone you catch staring at your boobalas, or something. Or NOT…

And in the meantime, my feetsies will be really enjoying themselves. These are boot socks and feel wonderful!

one down, four to go?

for the second year in a row, a SOX team has risen into baseball infamy!

In what was even more nerve wracking than a 5 hit inning, the last game of the World Series between the Chicago White Sox and the Houston Astros, like the night before, dragged ON & ON & ON! Luckily for me, I’d decided the SOX needed More Good Luck than what the gnarly hat I was wearing vibed so I broke out the big guns… 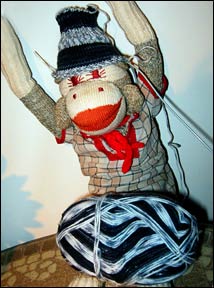 Grabbing some forgotten stashed Black & White Regia, I started a Victory Sock in Inning One. What you see here on Missy Monkey’s Head is the entire game’s worth, knitting as fast as I could because I could not bear to watch! Damn, those #1 needles are small…

I leave you this HAPPY MORNING! with

(as seen on the side of Comisky Park)