I can’t think of any better way (pardon my brain slippage here, ahem) of ending the year than with a BANG!

And just how BIG is that BANG!

ONE SLEEVE’s Worth, that’s RIGHT!

One tiny sleeve down and the Little Bad Muse TWIRLS
right into 2005!!! 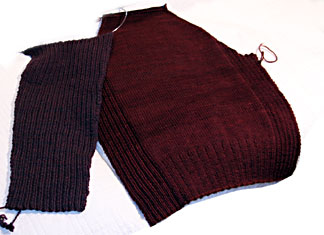 Since my other knitting seems like WORK to me this Holiday Week, I’m relaxing with a Ribby. It is a low stress, high output kind of project and I can’t wait to finish it so I can wear it. I am on a Burgundy Bender and it joins the 4 other Ribbys I already have in my Favorite Sweater Repetoire. I have the original Purple one, a Black one and a multicolored yoke one.

1. How to pick the right size to make: measure your chest at the fullest point. Make the next size up in the Finished Measurements listed. For instance, if your bust measures 37″ use the instructions for the finished measurement of 38/39 inches. You need what is called “ease” in the garment so that it isn’t too tight. Read about ease and how to size your knitware HERE.

2. Hate that Zipper? Use 8 large snaps (from a fabric store like Joann’s) sewn to the front edges to close. I have one I made like this and I love it!

3. Need Help with your Zipper? Go HERE for step-by-step instructions…

4. Join the fun at Gallery Ribby! Send me a picture of you in your finished ribby and I’ll post it to the Gallery. Here’s the work-in-progress page for an idea of what it’ll look like (details section still in progress until after the houseguests leave…)

And, as this New Year approaches, I TOAST all the Ribby Knitters out there far and wide and wish you Good Speed and Fine Health! 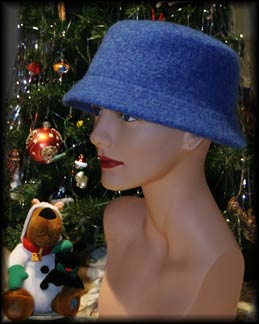 the ∑ in Xmas

SUM TOTALs usually bore me, but hey, it’s AFTER Christmas! So now it’s merely*historic* to recount the details – and I LOVE history…

Truly unoriginal, but FUN! Five bucket hats have wended and wound their way on a Christmas path far and wide to land on new noggins. Beside the Cubby Hat, this is my favorite, a Cascade 220 felted bucket (I lost the band so I don’t know the exact color). I am finally learning to check the hat in increments of 5 minutes (for better control – was lazily checking every 10 minutes or so) while it’s felting – I fish it out of the HOT sudsy water with the leftover plastic from – RU READY – a defunct brushless toilet brush – ahem – a HANDLE. We try not to throw ANYTHING away before its time in the ChicKnits Household (wondering who? those people are who eat everything but the SQUEAK – big EEEoouuuuwww all around – it’s my ancestors! The Sausage Eaters! I took my Mom into the best local Polish Deli around – Andy’s on Division – and she almost expired with delight upon gazing at the smoked sausage display hanging behind the *Ham* counter. I say ham, because there were about 50 different kinds of ham in that damn case!~ AND some cheese.)

BTW#1: It seems I’ve become addicted to using a new, combination of punctuation marks, because a simple “exclamation point” no longer can contain my AWE & WONDER with the world and writing about it at large. WITNESS – a tilde and exclamation point together: !~ which translates in Bonnese to “SUPER WHAT THE —-“. This just came flying off my fingers so I’m keepin’ it!~

BTW#2: One of my Favorite Flames of 2004 was someone who chastised me via email for using too many exclamation points in my entries. Like, dude, RU really THAT excited by LIFE! YES! I AM! AND! I won’t/can’t STOP!!!!!!!!!!

Ahem. That brings us to RoundUp Total 2: only 2 measley scarves for the Season. But this Kureyon baby gets you blinded by the light! this is my fave of the batch – a scarf pattern marriage of the Bow-Knot and the Try This Slotted Scarf Pattern in Kureyon Color #126.