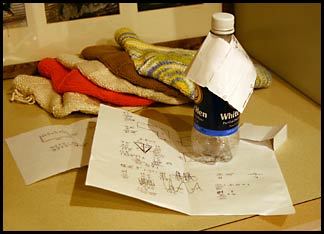 Hard to believe, but there is nothing new under the sun.

I’ve been steadily working on my lacy poncho for the vacation fest – originally the Urban Pshawl was supposed to be a just a long rectangle that I was going to just fold in half and seam part-way up one side, leaving a neck opening.

This poncho shape was a wonderful invention – ancient geometry fer sure! *Weave* a rectangle, rip it off the *Loom* and weave some edges together… I can imagine shepards all over the hills of Mesopotamia standing with their staffs in hand – ponchos on frame.

I got past the half-way mark a couple of days ago on my *Modern* poncho and decided to check it for size. I took several large stitch holders I bought used on eBay and used them to pin the sides of the poncho together. (This is my most exciting crafting moment this week – those stitch holders doubling as GIANT SAFETY PINS saving me from the tedium of basting!!! AAYiEEEEEEEEEEEE!)

So I slipped it over my shoulders while running to the nearest mirror. I generally love this feeling – up until the first moment you put something on, it’s really a crap shoot. It can be the most soft, beautifully colored, perfect…

I HATED IT! It had a little bunch at one side of the neck that wouldn’t lay flat. The lace pattern, coupled with the inelasticity of the yarn (mercerized cotton) I am using just wouldn’t behave in a nice flexible fashion needed for this design.

Bet those shepards standing on those faraway hills in 78 B.C. didn’t give a Rat’s A** about that little fold because they were too busy tending their fold…

I mean I really HATED IT! Here was my Vacation Goal busted all to H. If you recall, I am obsessed with finishing new clothes for special occasions and holidays and NOW, what was I going to do?

BUT NO! I did not Froggit! I decided to get real and just make a different shape. Suddenly, my DNA shifted into Evolutionary Gear and I ramped up about, hmmmm, a millenium, and started playing with paper.

And, in the picture above you see the results of my *study*, modeled by a White Hen Pantry 592mL water bottle. This wonderful garment is what *I believe* to be the next ancient poncho in history, recreated from copier paper that I tore with my own hands. It is now 2 rectangles, one folded over at the end and joined to the other. I COULD NOT GRASP how this really worked, even having seen it a million times in a million ways online and elsewhere, so I had to make a personal demo.

But of course, I had to run home and cannabilize my Urban Pshawl…

I figured out the numbers, went to the pattern repeat that was to become the end of Rectangle #1 and the beginning of Rectangle #2 and used two knitting needles to pick up stitches one row apart. Then I carefully snipped that middle row open and had VOILA! Two rectangles!!! One which needed to be knit down at that point for the edging and one that just needed to be cast off!

3. Agnes (to reward myself in the evenings if necessary)

4. That whole pile of Bucket Hats in the background for all the Familials – joined by 2 in progress. I’m totally having fun with Rowan Allseason’s Cotton and Sugar’n Cream.

In order to keep my 3attaTIME WIP Rule in effect, sometimes started objects have to hit the sidelines. It’s usually a fluke of the weather that gets them there – they’ve become too hot to handle or too difficult to manage.

Just so they won’t feel too impossibly rejected, I’ve gotten something to hold them, lovingly, in plain sight in my living room. This pretty leather chest was purchased to be a footstool but it had a greater purpose in store.

You’d be surprised how many UFOs I can stuff in there and it is only about 12″ high x 18″ long!

Saturday, I begin a great ROAD TRIP adventure. My family and I are going to Camp LeJeune, North Carolina to stay with my nephew for a week. He is in the Marines and stationed there before he ships BACK out to the place that will not be named here. We’ve rented a lodge on Onslow Beach and will be enjoying Nature – the Ocean – each other – for about a week.

Gawd! I hope my mother and I don’t really get on each other’s last nerve during two days straight of driving!

About two days ago, I heard distinct rumblings coming from the Chest of Dreams. “Take me!” was a muffled plea I heard. “NO – Take MEEEEE – I’ll be more fun” wafted into the air…

So I’ve made this pile and am just plain stymied about which little Buddy(s) get to enjoy the Tennessee and other road sites in store: 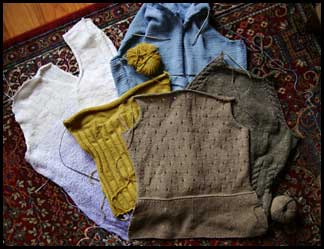 HELP!!!! Me Pick a Roadside Friend?!!! Any and all weather suggestions also greatly appreciated…

What’s it like at night on the Ocean? Will I be able to wear my Lacy Poncho???