Back in 2002, when the knitting on the internet was ramping up fast and furious, a major office supply company released a wacky commercial showing people wearing their hand-knit Christmas gifts, all knitted in lime green yarn.

The people were accompanied by copy that basically said “handmade sux!” I was so inspired by their incredible audactiy, that I wrote a blog entry which included notes for a nifty keyhole scarf, in but of course, the color they were also mocking, my favorite, lime green…

Someone recently wrote us asking about it, so we thought it’d be fun to clean it up (omg, I wrote that?!) and release it officially as a pattern, giving it a more friendly name (the Chic Keyhole Scarf). This cheerful Scarf is a rather fast knit, at 3.5 sts per inch AND you can use DK weight yarn doubled to get that gauge (or use reg Bulky weight yarn). Can be worn by men (ooh, handsome!) or women (oohlala, gorgeous)!

You can find the official version with our other free patterns, but here’s a picture of the scarf with its incredible original name… This time of year is chock full of duty tinged fun. There’s cookies to make; cards to send; presents to appear…

Most of my friends who are knitters are hard at work making lots of stitched gifts, myself included, but my workbasket is just a little different.

One of the bonuses of destashing the entire house, and I mean that literally, is that cupboards, closets, porches, garage are all being winowed and down-sized.

But some of the stuff is not going away, but being repurposed (the Packrat Smiles). I found something on the porch that would be much more fun indoors: a planter that could be used as a project holder. It was lanquishing all empty (because I’d been a very poor gardener last summer) and it seemed to just fit into the interior landscape much better. 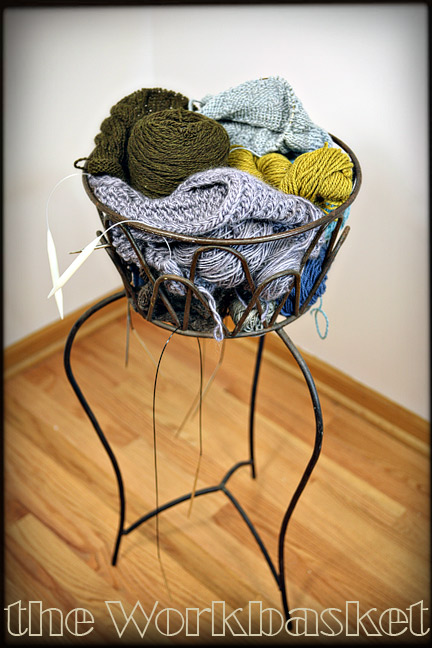 But because it IS the holidays, that means at least at Chez Chic, that there’s a lot of slacking and, yes, I’ll admit it: avoidance, going on. That new four-letter word, for me any ways, is Deadlines. They sort of crush the brain in a way that makes it want to do Other Things. In my case, that means, play with my picture a little. I love to make cover art, a leftover fancy from my school days where we were always homeworking on CD labels, book jackets and more.

I think the above picture would make a great little magazine cover, but in several flavors (click on pix for larger sizes):

From l. to r.: very Yankee Workshop; my attempt at making a font out of my own shaking printing; a modern, I-am-a-Worker look; and last but not least, everyone’s favorite – Rennie MacIntosh!

One of the most fun inventions that’s ever hit the planet is, imho, Twitter! It is the bastion of tidbits; the catalog of quick flash; and for a newsie like me, the ulitmate in headline news.

I love roaming around the place, following regulars and the At Large – current member with most followers, at this moment: Paul Pierce of the Celtics. (I’m Chic_Knits over there; if you leave your user name in the comments below, we can >>followyoufollowme<<.) It's a most intriguing way to travel the cultural timeline. It's sampling at its finest, where you can converse or just narrate your own nutshelled experiences. Whether you're expounding on current events or just ranting about burnt toast, it gives the most incredible glimpses behind the scene of your very own footprint on this orb. It's the most incredible Index of Civilization (or lack thereof) that's ever landed in my very own backyard. Tripping around the place the other day, I found a tweet by GuidoS, a cool podcaster (It’s a Purl, Man) from Boston. Now I’d met Guido at Rhinebeck, for like, two seconds last year (the festival is like that), but it’s following his posts that’s given a little more dimension to being an online friend.

The other day, he mentioned this: Sweater Vestival – where everyone is invited to wear a sweater vest on the second Friday after Thanksgiving (hee, tomorrow)!

Indeed, this is one of those cultural phenoms of the New Century – a totally made-up holiday in the spirit of something like, erm, the Corduroy Appreciation Club which “hails the wale.” (YES! I love corduroy too!)

This one is a no-brainer for me though – I love vests! And apparently, so do many others. From groups on Ravelry like Got Vests (YAY! No Sleeves!) to the CNN dandyman anchor who was once forbidden to wear one on the air while broadcasting, they are everywhere and EveryMan. He declares: “A Vest is Like an All-Day Hug” and I would have to agree…

Making it So Very Huggable:
– Takes smaller amounts of yarn
– Don’t have to get stranded on sleeve island when your cardigan mojo flops
– Works as wonderful layering in cold weather (it’s about 10 degrees wind chill here in Chicago today)
– But most importantly: looks DAPPER on a man and CLASSY on a la femme.

So from the Chic Knits Archives here’s a little slideshow of my collection, just some vestuary love…